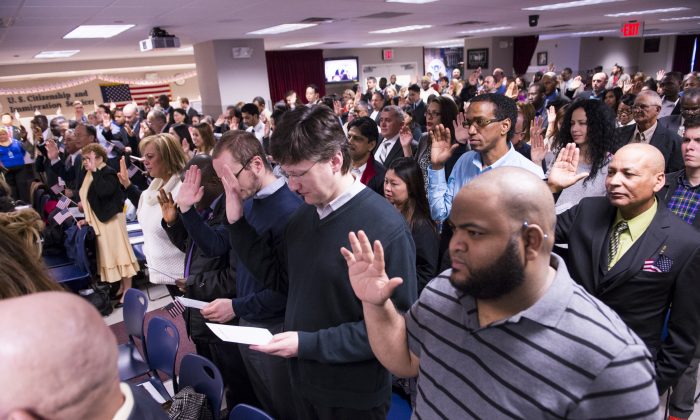 NEW YORK— In his 100th day on the job, U.S. Secretary of Homeland Security Jeh Johnson presided over the naturalization ceremony of 150 candidates for U.S. citizenship. Immigrants from 56 countries took the Oath of Allegiance in Manhattan on April 2.

Many of those who were sworn in have already made their mark as they pursue their careers in the U.S.

Rachelle Durkin was among those who took the oath of citizenship; she also performed the national anthem at the naturalization ceremony. Originally from Perth, Australia, Durkin won an opera singing competition which allowed her to come to New York 13 years ago. She was enrolled in the Metropolitan Opera’s Lindemann Young Artist Development Program and has been with the company ever since.

“I just love this country. As soon as I got out of the airport in New York, I knew I was home. It was a very, very strange experience for me,” said Durkin. “I always have wanted to become a citizen.”

Approximately one million immigrants come to the United States each year. The path to citizenship is a long one. Immigrants who come as adults usually become citizens more than a decade after first arriving in the country.

All citizenship candidates have to go through an application and interview process in order to receive their certificate of naturalization. In the process, they must prove their ability to read, write, and speak words in English. They must also demonstrate their knowledge of the history, form of government, and principles of the United States. Lastly, they must be of good moral character and committed to the principles of the Constitution.

Wie Zhang, a Chinese-born Long Island resident, came to the U.S. in 1997. She received her green card in 2006 and finally became a citizen today. “I was first a student, then I got a job. I received my work visa, then got my green card, and became a citizen this way,” Zhang said. “It was just this kind of step-by-step process.”

Zhang said she is very excited to become a citizen after waiting all these years. “I think the right to vote is very important,” she said. “I can help represent the Chinese voice.”

Esther Carvalhaes led the Pledge of Allegiance at the naturalization ceremony. Carvalhaes is the Director of Outreach at the Center for Women’s Reproductive Care at Columbia University. She came to the United States many years ago to work as a community organizer for immigrants. Carvalhaes said that, because of her work, her experience in becoming a citizen was very special.

“Only immigrants understand how hard it is to get to this point, especially those who come as adults. I came as an adult here, so we already bring our culture and our language. It’s an extra effort to be integrated, to learn the language, and to find ways to be productive and participate in building this society together,” said Carvalhaes.