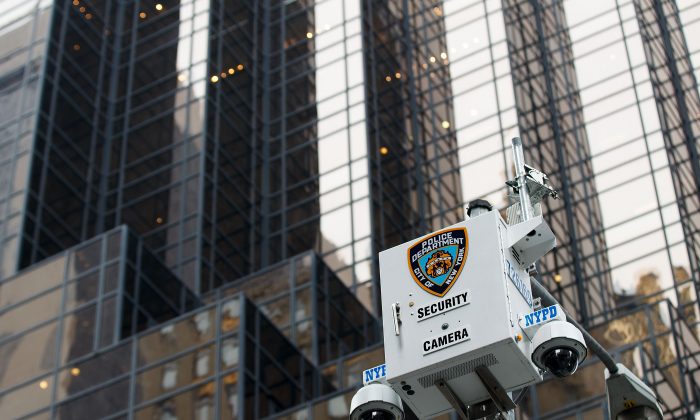 A New York City Police Department (NYPD) security camera hangs atop a light pole across the street from Trump Tower in New York City on March 7, 2017. (Drew Angerer/Getty Images)
US

A laptop computer holding the Trump Tower floorplans and information about Hillary Clinton’s email investigation was stolen from a Secret Service agent in Brooklyn, it has been reported Friday.

Officials have been trying to search for the laptop since it was stolen Thursday, according to the New York Daily News and ABC News, citing law enforcement sources. Items that were stolen with the laptop, including a black bag with a Secret Service logo and coins, were recovered.

The laptop is still missing. Police expect to identify the suspect via surveillance video evidence.

Sources told CBS New York that the laptop was stolen as part of a break-in in Bath Beach, Brooklyn. Officials aren’t sure if the theft was targeted or random.

Other “sensitive documents” were stolen, but it’s unclear what they entail.

The computer is encrypted, and officials can wipe the laptop hard drive clean if necessary, ABC reported, although CBS said the laptop can’t be remotely erased.

Video footage showed a thief stepping out of a car and stealing the computer from the agent’s vehicle. The man was then seen walking away from the scene with a backpack.

“The Secret Service is very heavily involved and, citing national security, there’s very little we have on our side,” a police source told the Daily News. “It’s a very big deal.”