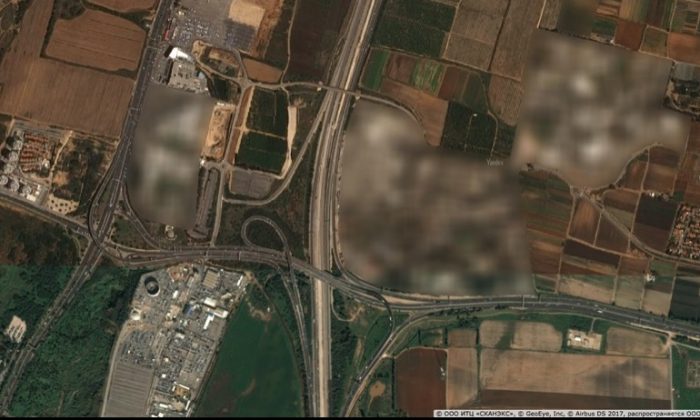 A Russian mapping service has meticulously blurred out a number of sensitive sites, but, by doing so, has inadvertently revealed the locations of top-secret military bases.

Yandex Maps, Russia’s equivalent to Google Maps, obscured the locations of hundreds of sites in Israel and Turkey, according to a report by the Federation of American Scientists (FAS), prompting satellite image analysts to investigate.

Analysts scrutinized the images and concluded that the blurred out spots are, in fact, military installations and other sensitive sites, including top-secret nuclear facilities.

When a Russian mapping service tried to obscure every military facility in Turkey and Israel, it had the unintended effect of *revealing* the exact locations of over 300 distinct sites (whoops) 😬

See the juicy details in my latest piece for @FAScientistshttps://t.co/2UJOVospF5

Technicians at online mapping companies sometimes blur out sensitive locations at the request of governments. They typically do this by reducing the resolution of larger swaths of territory so as to avoid calling attention to top-secret facilities.

Some mapping services are required by law to keep the resolution low, for instance, to hinder the efforts of terrorists.

Federal law in the United States forces mapping companies not to show Israel in any greater detail than that available with commercial satellite imagery, capping resolution at two meters (6 feet) and helping to thwart target reconnaissance.

“This blurring is almost certainly the result of requests from both Israel and Turkey,” Korda surmised, writing, “it seems highly unlikely that a Russian company would undertake such a time-consuming task of its own volition.

“Fortunately, this has had the unintended effect of revealing the location and exact perimeter of every significant military facility within both countries, if one is obsessive curious enough to sift through the entire map looking for blurry patches.

“By complying with requests to selectively obscure military facilities, the mapping service has actually revealed their precise locations, perimeters, and potential function to anyone curious enough to find them all.”

Korda noted, however, that Yandex didn’t do online map sleuths any favors when it came to Russian secrets.

‘Our Product Complies With All Regulations’

A Yandex spokesperson told Fox News, “Yandex has been developing mapping services for consumers and businesses for almost 20 years.

“In the past decade, we have expanded our mapping services to include new locations including Turkey and Israel.

“In countries where we are developing our services, such as Turkey and Israel, we are especially careful to update the maps and meet the requirements of local regulations. In the cases of Israel and Turkey, our product complies with all regulations and requests of the authorities. Certain locations in satellite images are blurred so that it is impossible to clearly see them. Our mapping product in Israel conforms to the national public map published by the government of Israel as it pertains to the blurring of military assets and locations. Our Turkish map product observes local rules and regulations similarly.”

Zealous compliance with requests to obscure military facilities, it would therefore seem, has by all accounts unintentionally caused carefully guarded secrets to be laid out as clearly as on a map.