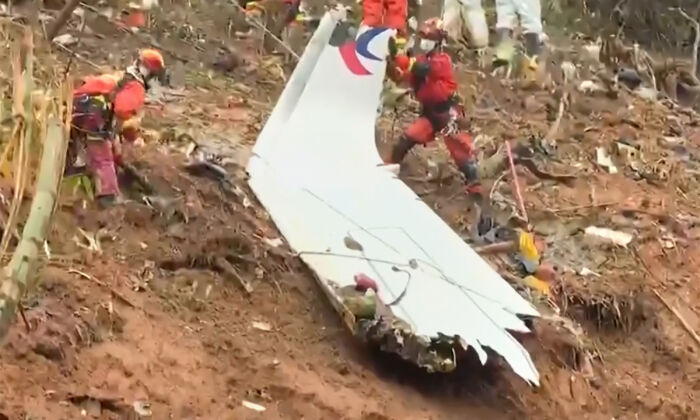 This screengrab taken on March 24, 2022 from video by state broadcaster CCTV via AFPTV shows a piece of the fuselage of a China Eastern passenger jet that crashed onto a mountainside near Wuzhou City in China's southern Guangxi region. (STR/AFPTV/AFP via Getty Images)
Social Issues

WUZHOU—Searchers found engine parts from a China Eastern passenger jet that crashed in southern China with 132 people on board earlier this week.

No survivors have been found.

Some human remains and engine parts were found, as well as items from the cockpit and some belongings to passengers, officials said. State TV showed searchers on a denuded slope trying to dislodge a white wing section with the airline’s red-and-blue logo.

One of two black box recorders, believed to be the cockpit voice recorder, was found Wednesday. Its outer casing was damaged but the orange cylinder was relatively intact, investigators said.

The Chinese authorities has sealed off a large area around the crash site and tried to control information about the disaster.

Foreign media were escorted into the zone for the first time Thursday. Police and other vehicles were parked along the highway. Journalists were driven down small roads covered in red-brown mud to the command center.

When they passed a woman in tears who was being led away, security officials used open umbrellas to try to block the journalists from filming from their vehicles.

Investigators have said it is too early to discuss possible causes.

An air traffic controller tried to contact the pilots several times after seeing the plane’s altitude drop sharply but got no reply, officials have said.

The Chinese authorities have yet to release the pilots’ names, but news reports identified the captain as Yang Hongda. The co-pilot, according to news reports, was Zhang Zheng, a veteran with 32,000 hours of flying time in a 30-year career.

An unidentified former colleague of Zhang cited by the online news outlet The Paper said he was a mentor to young pilots who had a “sunny disposition” and captained the air academy’s basketball team.

A second co-pilot, Ni Gongtao, was flying with them to gain experience, according to news reports.

The Boeing 737-800 was cruising at 29,000 feet when it crashed, starting a fire that could be seen in NASA satellite images.

The plane was flying from Kunming, the capital of Yunnan Province in China’s mountainous southwest, to Guangzhou, a major city and export manufacturing hub in the southeast.

Authorities say there were no foreign passengers aboard.