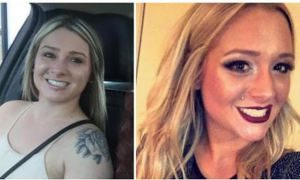 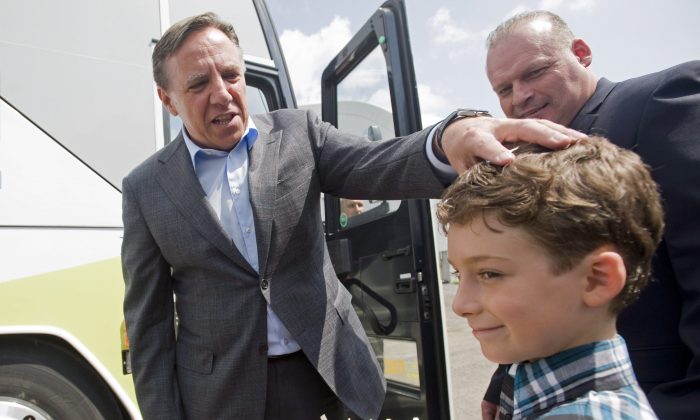 Coalition Avenir Quebec leader Francois Legault, left, is offered tomato's by owner of Biologico organic tomato greenhouse Stephane Roy and son Justin on August 16, 2012. A search is under way for Roy and his son, who did not return from a fishing trip in northern Quebec as planned. (Graham Hughes/The Canadian Press)
Canada

Search on for Prominent Businessman, Son After Helicopter Goes Missing in Quebec

MONTREAL—A prominent Quebec businessman known for his exploits in the greenhouse tomato industry and his teenage son remained missing Friday after the helicopter they were travelling in failed to return from a fishing trip.

Stephane Roy is founder and president of Sagami Inc., which sells greenhouse tomatoes and strawberries under the Sagami and Savoura brands.

His company said in a statement its officials are doing everything they can to ensure Roy and his son are found safe and sound.

Quebec provincial police said relatives reported them missing on Thursday morning and that the pair were last seen preparing to leave the cabin at about 12:30 p.m. Wednesday in the Parent district of La Tuque, QB., more than 400 kilometres north of Montreal.

On Friday, Canadian Forces planes and helicopters continued to search a vast area, examining possible routes the missing helicopter may have taken between Lac De La Bidiere and Ste-Sophie, the Laurentians community about 90 minutes away from where Roy lives.

A Hercules plane and three Griffon helicopters were being used in the search alongside civilian search and rescue organizations, Capt. Trevor Reid said from Trenton, ON.

Search teams had been scrambled Thursday, but were hampered by heavy thunderstorms.

Roy was described as an experienced pilot with numerous flight hours aboard the craft in question, a Robinson R44 helicopter.

“It was his own helicopter, an aircraft in excellent condition, Mr. Roy is someone who is very structured, who takes care of his equipment,” said Andre Michaud, a friend of Roy’s and president of Agro Quebec.

Four people—Roy and son in the helicopter and two others in a seaplane—travelled to the chalet for a few days. The plane returned as scheduled but the helicopter did not.

A Facebook page was created Friday specifically geared towards gathering information about Roy and his son, as many would be heading to the region this weekend.

Michaud said it has been difficult time for the company, but hailed the mobilization of local teams that were leaving no stone unturned to find the pair.

“All we have is a trajectory,” Michaud said. “But it’s Point A to Point B, so with about 20 aircraft in the air, we think we’ll be able to at least find some clues.”

Quebec provincial police spokeswoman Helene Nepton said police have set up a command post and are ready to move once the craft is found. The Canadian Forces say there’s no time frame for how long such an operation can last.

“We take these searches hour by hour, we don’t look too far to the future or speculate on what might happen,” Reid said. “Our focus is the operation at hand.”

Michaud described Roy as a North American model in the industry. The privately held company operates eight production facilities in Quebec and is committed sustainable agriculture.

The entrepreneur was described as the “undisputed king of greenhouse tomato production in Quebec” in a 2015 feature in the Montreal Gazette newspaper.

“He is an entrepreneur in its purest form,” Michaud said of Roy. “An entrepreneur who is focused on sustainable development, the environment, and organic growing.”