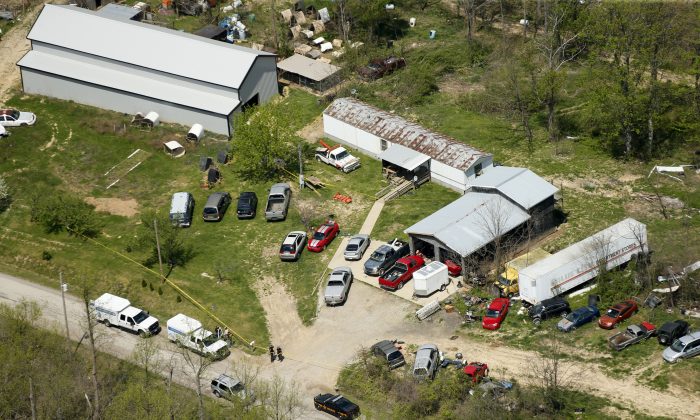 This aerial photo shows one of the locations being investigated in Pike County, Ohio, as part of an ongoing homicide investigation, on April 22, 2016. Several people were found dead Friday at multiple crime scenes in rural Ohio, and at least most of them were shot to death, authorities said. No arrests had been announced, and it's unclear if the killer or killers are among the dead. (Lisa Marie Miller/The Columbus Dispatch via AP)
Crime and Incidents

PIKETON, Ohio—A day after eight members of one family were found dead with gunshots to the head at four properties in rural southern Ohio, authorities on Saturday continued the scramble to determine who targeted that clan and why.

Investigators said they interviewed more than 30 people in hopes of finding leads in the deaths of the seven adults and 16-year-old boy whose bodies were found Friday at homes southwest of Piketon.

All were shot in the head, authorities said, and it appeared some were killed as they slept, including a mother in bed with her 4-day-old baby nearby. The newborn and two other small children were not hurt.

Authorities said all the victims were members of the Rhoden family, but they declined to provide any more information about them.

Investigators said that none of the deaths appeared self-inflicted and that they believed at least one assailant remained at large, considered armed and dangerous. Investigators were following up what they described as an “overwhelming” amount of tips, but no one had been arrested.

Authorities urged surviving members of the Rhoden family to take precautions and offered help, and they recommended that area residents also be wary.

Phil Fulton, the pastor of Union Hill Church up the road from where some of the victims were found, described the family as close-knit and hardworking. He said they were previously part of his congregation, though not recently.

“We’re just doing everything we can to reach out to the family to show them love and comfort,” Fulton said.

Reading a statement from the family, Kimberly Newman of the Ohio Crisis Response Team, told reporters gathered alongside the barricaded road that leads to some of the crime scenes that they appreciated “the outpouring of prayers and support.”

“They ask that you continue to keep them in your prayers,” Newman said.

The exact timing of the shootings remained unclear. Authorities first got word in an emergency call shortly before 8 a.m. Friday from someone reporting blood in a home with two males possibly dead, and responding deputies were flagged down about more victims at two others homes, Pike County Sheriff Charles Reader said.

Two of the crime scenes are within walking distance of each other along a sparsely populated, winding road that leads into wooded hills from a rural highway. The third residence is more than a mile away, and the fourth home, where a man’s body was found later Friday, is on a different road, at least a 10-minute drive away, said the investigation’s leader, Benjamin Suver, a special agent in charge with Bureau of Criminal Investigations.

Investigators blocked off wide areas around the crime scenes, but aerial photos showed law enforcement vehicles parked outside the properties. One scene appeared to have a trailer home and several others buildings a short walk apart, with a school bus and numerous other vehicles parked in the grass around the property.

Reader and Ohio Attorney General Mike DeWine said in a joint statement Saturday that investigators worked through the night processing evidence at the scene. Officials said a Cincinnati-area businessman put up a $25,000 reward for information leading to the capture and conviction of the killer or killers.

Authorities refused to discuss details about the crime scenes, such as the type or number of weapons used, what evidence was found and whether anything appeared to be missing from the homes.

They didn’t identify the dead by name but confirmed all victims were members of the Rhoden family. The owner of at least two of the properties is listed as Christopher Rhoden, according to Pike County auditor’s records.

Kendra Jordan, 20, said she often worked nights with one of the victims as a nursing assistant at a nursing home. She described her as very outgoing, very funny and always smiling.

“If you were having a bad day, she’d be the first one to come up to you to question you about what was going on,” Jordan said. “She was amazing.”

The shooting left some people on edge in and around Pike County, an economically distressed area that’s home to about 28,000 people and a shuttered Cold War-era uranium plant whose cleanup provides hundreds of local jobs.

Jordan said the town would have difficulty recovering from the loss of a such a well-known family in the tight-knit community.

“Everyone knows that family, you can’t not know that family,” she said. “They’re involved in everything, and they’re at every event that’s going on in town. Just about see them anywhere you went.”