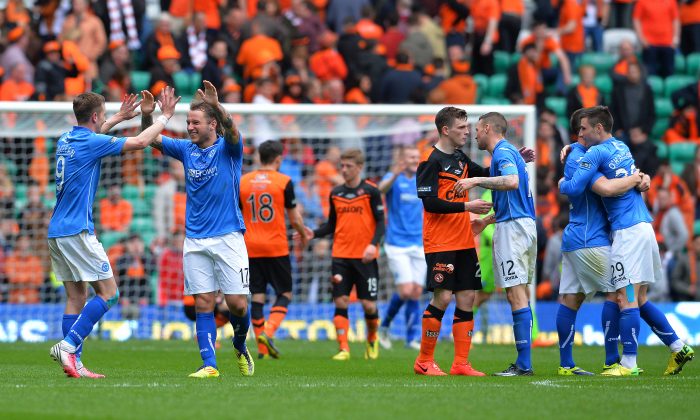 Steve MacLean (L), and Steven May of St Johnstone celebrate their teams famous victory over Dundee United during The William Hill Scottish Cup Final between St Johnstone and Dundee United at Celtic Park Stadium on May 17, 2014 in Glasgow Scotland. (Photo by Mark Runnacles/Getty Images)
Soccer

Steven Anderson and Steven MacLean each scored a goal.

It was the first Scottish Cup win for St. Johnstone.

Anderson told BBC Radio Scotland: “It’s about time the club won something. There has always been great team spirit and now we have delivered on the good work we’ve done over the last few years.”

The Guardian said in a recap:

“So in a tussle between two well-matched positive sides, it was Saints’ superior know-how and tenacity in defence that, on balance, proved the decisive factor in bringing the old trophy to Perth for the first time. Dundee United showed fairly regular flickerings of the flair for which they have become renowned, but they were mostly only flickerings, against a defence that did its job doughtily.

“For that, and for taking their chances more ruthlessly, Saints deserved their win, even if the luck was with them too, with United suffering unkind rebounds off post (first half) and bar (second half).”