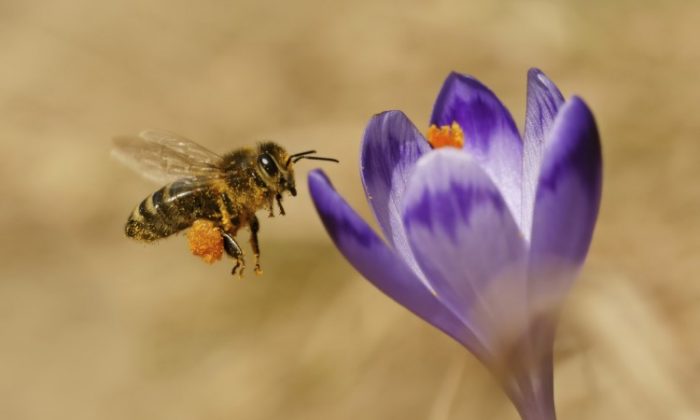 A group of Canadian and European scientists is calling for a discussion in the science community about the potential impact of neonicotinoid pesticides on bees. They're hoping for clarification in what they say is one of the most controversial topics in science and policy. (Photos.com)
Canada

Evidence is being used selectively by parties with divergent agendas, scientists say
By Kaven Baker-Voakes

A group of nine Canadian and European scientists is calling for a discussion in the science community about the potential impact of neonicotinoid insecticides on bees.

With evidence that in Europe and North America many species of pollinators are in serious decline, the scientists are hoping to better inform and clarify the science for what they say is one of the most controversial topics in science and policy.

“There has been a lot of public debate and concern about the scientific evidence being used selectively by parties with very different agendas. We have seen strongly polarized opinions with the same study being used to back up different points of view,” said Nigel Raine, Rebanks Family Chair in Pollinator Conservation at the University of Guelph and co-author of an article on the issue.

In the article, published in the Proceedings of the Royal Society B, the scientists appeal for a return to science-based evidence. They say that while there is a long list of potential causes for the decline in pollinators, there is concern that neonicotinoids are in part responsible, particularly through their use as seed treatments.

“The key idea was to get together a group of scientists directly involved with neonicotinoid pesticide research, or with relevant policy experience, to assess objectively the evidence coming out of the science base on what we know about the effects these pesticides have on bees and other pollinators and the limits of our knowledge,” said Raine.

Instead of taking sides in the debate, the scientists are calling for more research into the impacts of the pesticides, noting the importance of seeking input from farmers, beekeepers, and the public at large.

“It is not just a bee conservation question—it is about maintaining the critical ecosystem service of pollination,” said Raine.

“It is also a question about sustainable food production and economics. What is an acceptable level of risk? That is really a governmental decision and to make an informed decision they need to have input from all of the relevant stakeholders.”

Similar comments have been made by some researchers during the Senate Committee on Agriculture and Forestry’s investigation into bees and bee health, who have called for conferences to enable researchers to better understand science gaps.

Senators heard testimony that a variety of factors may be causing the decline in pollinators, ranging from the varroa mite, pesticide residues, environmental changes, and neonicotinoids, a relatively new class of pesticides.

In recent testimony, Prof. Dennis vanEgelsdorp, an entomologist at the University of Maryland, noted the current questions and potential answers around the decline of bees are different than in the past.

“We often think about 10 to 20 years ago when beekeepers had huge losses because of pesticides. The difference was they found piles of dead bees in front of their hives so they knew it was the pesticide. Now we have to figure out if it’s true that neonicotinoids are playing a role in colony levels as the mortality is happening many months later. It seems to be confused because there are other contributing factors, unless it’s that dust cloud we talked about,” vanEgelsdorp told the committee.

VanEgelsdorp was referring to dust emitted from seed planters, which can contain high concentrations of neonicotinoids. According to the scientists’ article, this dust gets deposited on the surrounding soil and can drift to contaminate nearby flowering crops and natural vegetation as well as surface waters.

“Sporadic incidents of mass honeybee mortality in several EU countries, the USA, and Canada have been caused by dust from seed drilling machines (seed planters),” the article states.