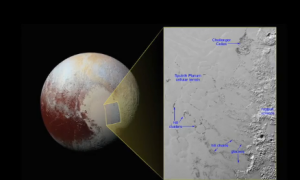 Scientists Say There May Be a Hidden Ocean on Pluto (Video)

Is there an ocean under Pluto’s surface? Scientists have been exploring that possibility since New Horizons’ flyby of the dwarf planet last year and new research is providing additional details on the fascinating subject.

According to a press release, “The study, led by Brown University geologist Brandon Johnson and published in Geophysical Research Letters, finds a high likelihood that there’s more than 100 kilometers (or 62 miles) of liquid water beneath Pluto’s surface. The research also offers a clue about the composition of that ocean, suggesting that it likely has a salt content similar to that of the Dead Sea.”

Researchers arrived at the findings by “modeling the impact dynamics” which led to a large crater on Pluto.

The university’s news release further notes, “The research focused on Sputnik Planum, a basin 900 kilometers [or 559 miles] across that makes up the western lobe the famous heart-shaped feature revealed during the New Horizons flyby. The basin appears to have been created by an impact, likely by an object 200 kilometers [or 124 miles] across or larger.”

Describing the models, the statement says they “…simulated the impact of an object large enough to create a basin of Sputnik Planum’s size hitting Pluto at a speed expected for that part in the solar system. The simulation assumed various thicknesses of the water layer beneath the crust, from no water at all to a layer 200 kilometers (or 124 miles) thick.”

Scenario that best reconstructed current conditions was “one in which Pluto has an ocean layer more than 100 kilometers [or 62 miles] thick, with a salinity of around 30 percent.”

Scientists hope to gain further insight on the subject matter after further analysis of data gathered by New Horizons.