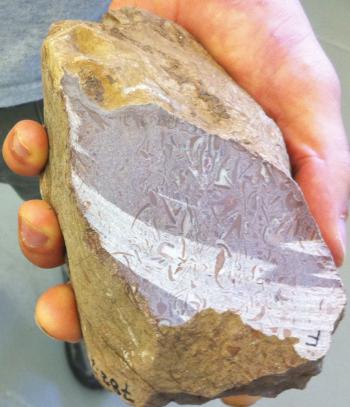 Princeton geoscientist Adam Maloof holds a rock from South Australia that may contain the oldest fossils of animal bodies ever discovered. The fossils, visible here as red shapes, suggest that sponge-like animals were in existence about 650 million years ago. (Courtesy of Adam Maloof)
Beyond Science

Stephanie Lam
View profile
Follow
biggersmaller
Print
Scientists have discovered animal fossils from about 650 million years ago. These fossils are older than all animal fossils previously discovered. The fossils, found in South Australia, are of hard-bodied, sponge-like animals.

“These scientists have found that animals may have appeared on Earth 90 million years earlier than previously known,” said H. Richard Lane of the National Science Foundation in a press release. “This is comparable to resetting modern times to begin during the late Cretaceous.”

“We were accustomed to finding rocks with embedded mud chips, and at first this is what we thought we were seeing,” said Dr. Adam Maloof of Princeton University in a press release. “But then we noticed these repeated shapes that we were finding everywhere—wishbones, rings, perforated slabs and anvils. We realized we had stumbled upon some sort of organism, and we decided to analyze the fossils.”

The finding was published in the journal Nature Geoscience on Aug. 17.