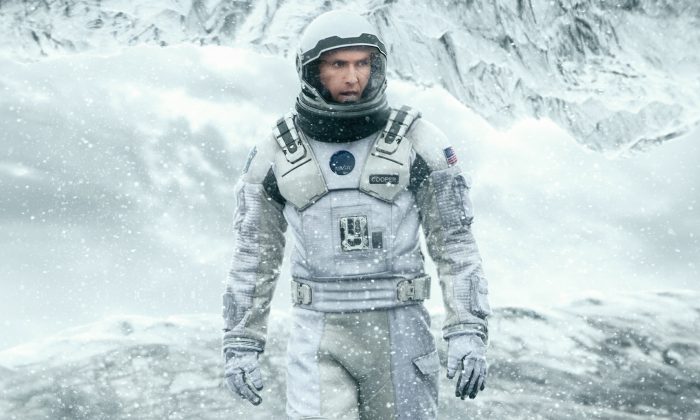 The characters describe esoteric cosmological concepts such as how a wormhole allows space travelers to take a cosmic shortcut. They explain how a feature of relativity known as time dilation means time passes more slowly in the presence of a black hole and its massive gravitational pull. And they show how the solution to mysteries of physics can be found in the uncharted void at a black hole’s center.

These knowledge-nuggets are pivotal to the film’s plot, which follows a team of scientists and engineers who travel to other stars seeking a new planet for a doomed population. Dust Bowl-like Earth has exhausted its natural resources.

The cosmological legitimacy of director Christopher Nolan’s sci-fi epic has been vouched for by today’s arbitrator of scientific accuracy in films, Neil deGrasse Tyson. The celebrity astrophysicist praised the film’s accuracy.

But what makes Interstellar more interesting, for me, is that it is emblematic of two powerful recent trends in the presentation of science in popular culture. First, the obsessive drive towards creating more accurate depictions of science on screen. And second, the increasing movement toward the portrayal of scientists as heroes.

Interstellar has as one executive producer Caltech astrophysicist Kip Thorne, a world-renowned expert on what Einstein’s general relativity means for cosmology. Thorne developed ideas for the movie and advised Nolan on how wormholes and black holes should look.

As science studies scholar David Kirby noted in Lab Coats in Hollywood, science consultants have a role beyond helping directors incorporate realistic science into their movies. They also give the films a stamp of scientific approval. The Guardian picked up on this idea, writing in its Interstellar review that the inclusion of Thorne’s name as producer “may be intended as an extra-textual guarantee of authenticity.”

Kirby argued that science consultants get another benefit from the cinematic collaboration. The presentation of their ideas in such a powerful medium makes often-hypothetical concepts more real and more persuasive, drawing increased scientific and public attention to their work.

Science consultants’ impact should not be overestimated – after all, the filmmakers have the final word – but their role has influence. Organizations such as the National Academies of Science and its Science & Entertainment Exchange program support and facilitate these relationships by hooking scientists up with TV and movie makers.

And these consultants have helped shape the science that you see in the sci-fi shows Fringe, Defiance, Falling Skies, and Battlestar Galactica. They mold part of the science you’ve seen in science-focused films such as Gravity, Jurassic Park, Contact, and The Day After Tomorrow.

But they also help weave real science into shows and movies that are not directly about science. Breaking Bad gets right the chemistry of meth production. The DVD version of Finding Nemo has no kelp in the coral reef, since it only grows in cold waters.

Interstellar is interesting also because, as Tyson also noted, all the lead characters are scientists or engineers. By remarking upon this point, he reflects a longstanding notion among scientists that the entertainment industry produces negative stereotypes of them and their work. The mad scientist. Dr. Frankenstein. The geek.

But as science communication researchers Matthew Nisbet and Anthony Dudo note in their synthesis of studies of on-screen scientists, the recent trend has been towards presenting scientists as heroes and voices of virtue. They point to examples as varied as Tony Stark in the Iron Man franchise and Dr. Temperance Brennan in Bones.

Yet while scientists discuss the importance of accuracy for enhancing the general public’s scientific literacy, there is only limited evidence about the effect these portrayals have on audiences. Researchers agree that an individual viewer’s background is crucial to how they interpret science on screen.

And accuracy is not the only issue at stake. Breaking Bad’s science consultant ensured the actors described the correct chemical agents needed to make crystal meth. But as I described in a book chapter about the show, Breaking Bad presents chemists as secretive and morally ambiguous figures – presenting chemistry as a problematic science.

What is missing from much science in entertainment is what David Kirby in a recent book chapter called the systems of science. That is, an authentic portrayal of the methods of science, how scientists interact, and the links between science, the state and wider culture and society.

I saw some of this in Interstellar, but not in its speculative physics. It opened with documentary-style interviews with people describing life on a ravaged future Earth. In reality, they were actual survivors of the 1930s Dust Bowl, relating their own stories.

That human-induced environmental disaster can be understood as drought combined with systems of science – a failure to apply correct farming methods and use of mechanized farm machinery – that fused to cause mass human misery.

Yet Nolan told Time he didn’t want his film to convey the true level of suffering and devastation of the 1930s heartland. He thought audiences wouldn’t believe it.

Declan Fahy does not work for, consult to, own shares in or receive funding from any company or organisation that would benefit from this article, and has no relevant affiliations. This article was originally published on The Conversation. Read the original article.