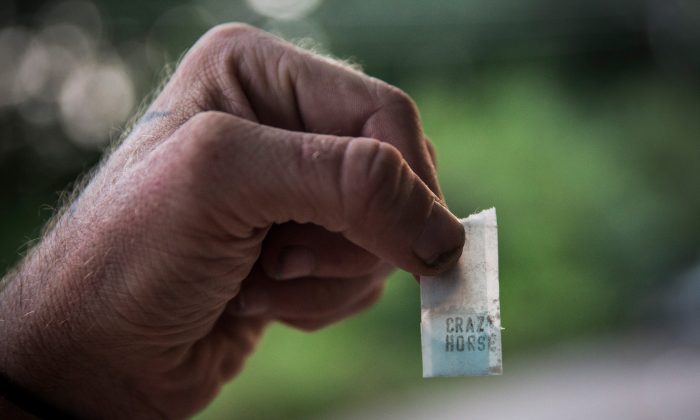 Reggy Colby, a 30-year-old recovering heroin addict, displays a bag of heroin sold in Camden, N.J., on Aug. 21, 2013. Colby says he got out of jail two days ago, where he was forced to get clean while serving a 30 day sentence. According to Colby, he was in jail for for stealing food after getting hungry. Colby says he grew up in a "Leave it to Beaver" home in Cherry Hill, an afluent city nearby, and originally went to college for architecture before dropping out. After leaving school, he moved to Florida, where he got married and had a daughter, Colby says. He joined the army in 2007, trained as a field artilery specialist and served in Afghanistan in 2009 through 2010, until he was injured in an improvised explosive device, which peppered his body with shrapnel, Colby says. It was while recovering from his injuries that he became addicted to heroin, a drug he had also tried as a teen. Since becoming addicted, he has been dishonorably discharged from the Army, divorced, and estranged from his daughter, and has become homeless in Camden. (Andrew Burton/Getty Images)
US

ORLANDO, Fla.—He was 40 years old, a father of three and an Orlando house painter, clean and sober for eight years. One night last summer, he climbed into his truck, stuck a needle in his arm and injected himself with what would be his final dose of heroin.

“The paramedics worked on him for a long time, and when they declared him dead he was still clutching his last bag of the drug in his fist,” says Pastor Spence Pfleiderer. “That’s the power of addiction.”

As president and CEO of the Orlando nonprofit treatment program Central Care Mission, Pfleiderer has served seven years on the front lines of the war on drugs, fighting for those whose often-fragile grip on sobriety pits them against an unrelenting enemy.

I tell my guys, ‘One of the easiest things in the world is getting you off drugs. It’s staying off that’s the hard part.’
— Pastor Spence Pfleiderer, president & CEO, Central Care Mission

“I tell my guys, ‘One of the easiest things in the world is getting you off drugs,” he says. “It’s staying off that’s the hard part.”

Despite decades of public-awareness ads to “Just Say No,” the nation still has little to show in the battle to overcome addiction. In fact, the American Society of Addiction Medicine reports a “staggering rise” in the problem, particularly with heroin.

The failure, scientists believe, stems from a misguided mentality that addiction is a moral flaw—and that overcoming it is a matter of willpower. The reality, as brain research now shows, is far more complicated.

Addiction is not only a disease, they say, it can apply both to substances such as drugs and alcohol and to behaviors.

“This is why people just can’t quit: Their brains have been changed,” says Dr. Valerie Westhead, a psychiatrist and chief medical officer for Aspire Health Partners in Central Florida. “And we’ve just really fully understood that within the past five years or so, and I don’t think the understanding is pervasive even among medical professionals. It’s going to take a while.”

Through advances in medical scanning equipment, researchers can now trace the brain’s neurotransmitter activity, energy use and blood flow as it is exposed to addictive substances. They can also see how the brain alters itself over time as it attempts to maintain normalcy despite overwhelming stimulation—which is why addicts need greater and greater quantities to experience the same result.

The research led the American Psychiatric Association to a 2013 landmark decision to classify “gambling disorder” as the first and so far only condition in a category of behavioral addictions that create the same brain responses, rewards, cravings and tolerance levels that addictive drugs do.

Internet gaming disorder could be added next. It’s officially under consideration, while other behaviors and food are being investigated for possible consideration. Dr. Mark Gold, director of research for the Drug Enforcement Administration Educational Foundation and the retired chairman of the UF College of Medicine’s psychiatry department, says sugar demonstrates strong addictive potential. And even something normally considered healthy, such as exercise, can be weakly addictive, he says.

Westhead agrees. “I think there are a lot of unanswered questions about compulsive exercise and eating disorders,” she says. “We’re just beginning to understand the aspects of behavioral addiction.”

While addiction and physical dependence were once used interchangeably, scientists have shown the process of addiction uniquely targets the brain’s so-called “pleasure centers” by flooding them with dopamine, a neurotransmitter. The more powerful the addictive substance, and the more quickly it reaches those dopamine receptors, the more addictive it is.

“The drug becomes more important than anything else,” says Darrell Stevenson, 54, who has spent the past year in an Orlando residential treatment program, staying clean and working. The recovering cocaine addict once easily blew through $400 of the drug in a weekend.

It cost him a marriage, a relationship with his children and five years in prison when, craving his next high, he grabbed a fistful of cash at a bank.

“I went to cash a check, and the teller was taking too long, so I just reached over the counter,” he says. “I had always worked, I had always paid my bills, I always thought of myself as a good guy. But I couldn’t wait… I never want to go back to that.”

Stevenson got clean the hard way—behind bars—but researchers say their work may lead to medical solutions instead of criminal-justice ones.

“The progress has been so great that you can detox a heroin addict without giving them heroin, morphine or methadone, and you can then give them another medication that makes them immune to opiates,” Gold says. “They can’t even feel it. So they can’t tell the difference between saline and heroin.”

The Surprising Foods That Alleviate Anxiety

Simplify Your Life to Take Control of Anxiety

Of course, as Gold points out, they have to take the medication. And that’s the problem.

The main drug currently used for alcohol and opiate abuse—naltrexone, marketed as Revia and Vivitrol—for years came only in pill form, which must be taken at least three times a week and tends to be expensive, Westhead says. A newer, long-acting injectable form may be more reliable, she says, freeing addicts from the constant cravings that make it nearly impossible to think about anything else.

But why does someone become addicted in the first place?

Dr. Yngvild Olsen, an addiction medicine specialist who leads the public policy committee of the American Society of Addiction Medicine, says roughly half of an individual’s vulnerability to addiction stems from genetics—the way our brains are wired when we’re born. The rest is what happens along the way, including, especially, what happens very early in life.

“It’s thought that early childhood trauma, particularly trauma that is sexual or physical in nature, leads to changes in the brain as the child develops,” Olsen says. “Because the other thing we know is that the brain is not fully formed—particularly certain key parts—until about age 25.”

Anxiety Is 800% More Prevalent Than All Cancers Combined

Early exposure to drugs, especially that of a child in the womb, is the most devastating and the most likely to lead to addiction later, she says.

But there are other vulnerabilities—having depression, anxiety or other mental illness, for instance, or being in an environment where you have access to drugs, face peer pressure or are surrounded by the type of chaos that drives people to want to escape reality.

And no one thinks science alone will solve the problem.

Olsen, for instance, compares drug addiction to the nation’s epidemic of diabetes. Even if doctors could give every addict a pill to block the addictive impact of drugs, alcohol or gambling, users would still be vulnerable.

“Medication alone doesn’t solve their chronic problem, and that’s where people need the behavioral intervention,” she says. “People with diabetes need to learn how to shop, how to cook, how to go to a birthday party and explain to their friends why they can’t eat that piece of cake.”

It is why, she says, many people get tripped up on whether drug abuse is a disease or a choice. At some level, it’s both.

To Pastor Pfleiderer, relearning the business of life is essential. At Central Care Mission, men stay up to two years. They have to work, save money, attend counseling, volunteer and pray if they want to succeed, he says. The time alone helps their brains heal, but they still have to address what led to their addiction to start with.

“As soon as someone leaves or graduates,” he says, “someone new moves in.”

Information from the Orlando Sentinel.