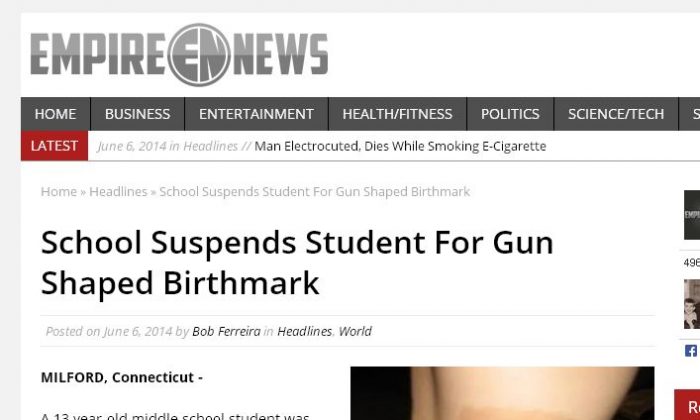 An article saying that a school suspended a 13-year-old middle school student for having a gun-shaped birthmark is fake.

The fake report was published on Empire News, a self-described “satire” website.

“A 13 year-old middle school student was suspended today when a teacher noticed that the boy had a “gun shaped” birthmark on his leg. The boy, whose name was not released at his parents’ request, wore shorts to school for the first time this year, and when the teacher, Charlene Brooks, saw the birthmark on his leg she immediately informed the school principal and superintendent,” it reads.

It adds: “Recently throughout the country there has been an excessive amount of ‘gun paranoia’ in schools, with children being suspended or even expelled for things as menial as biting a Pop-Tart into the shape of a gun or even just pointing a finger at someone else and saying ‘boom,’ which is what happened only a few short months ago in Ohion to 10 year-old Nathan Entingh.”

According to a disclaimer, it’s a fake news website. The site “uses invented names in all its stories, except in cases when public figures are being satirized. Any other use of real names is accidental and coincidental,” and adds that it “is a satirical and entertainment website.”

The birthmark article had thousands of shares on Facebook as of Friday.

Also of note, the fake story didn’t say what school it was and no mainstream or local media in Connecticut reported on such an incident.