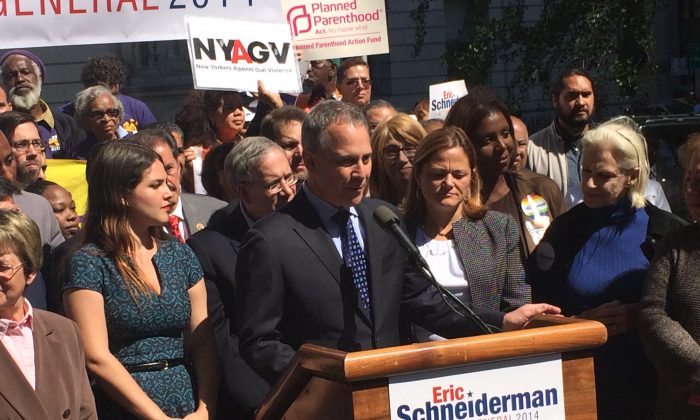 Schneiderman Kicks Off Campaign With Rally

NEW YORK— Aiming for a landslide victory, incumbent New York attorney general Eric Schneiderman inaugurated his re-election campaign with aplomb at Park Row Plaza near City Hall, flanked by a litany of political allies from across the state.

The tightly choreographed rally highlighted Schneiderman’s achievements in office, especially in the areas of labor and reproductive rights.

“Eric Schneiderman has fought hard for people like me, he’s making sure all workers are making the money that they earn,” said Shantel Walker, a shift-manager at Papa John’s who makes $8.50 an hour.

Walker is a mainstay at fast-food worker protests in New York, and she has been featured in national outlets like the New Yorker, the Nation, and CNBC.com as well as on MSNBC’s All In With Chris Hayes. She also spoke at Schneiderman’s nomination at the state Democratic convention in May.

“He’s fought for the rights of working New Yorkers,” said council speaker Melissa Mark-Verivito. “Most recently I stood with him as he announced a major settlement for car-wash workers whose wages have been stolen and robbed.”

“Eric has been taking on the tough fights others might have shied away from,” said city Comptroller Scott Stringer, alluding to the Schneiderman campaign’s TV-ad series, “Tough Fights, New York Voices.”

“We’ve got to make the phone calls and energize the progressive base in this state, because we need him to have a mandate going forward.”

Schneiderman is heavily favored to beat his Republican challenger John Cahill, who trailed the attorney general by 22 points in an August Quinnipiac poll showing 29 to 51 percent.

“Cahill responded to his sinking poll numbers with a Hail Mary move. He’s spending $750,000–or three-quarters of his $1 million in cash on hand–on a late-August TV ad, the timing of which underscores Cahill’s desperation,” he wrote in an email obtained by the Daily News.

“Schneiderman has nearly $8 million to spend going into the election season.”

Still, new revelations about the activities of ex-lobbyist and consultant Jennifer Cunningham and the attorney general’s office could throw a wrench in his reelection bid.

Cunningham was married to Schneiderman between 1990 and 1996, and was the media strategist of his 2010 campaign.

A Freedom of Information Law (FOIL) request made by Crain’s New York, which was initially rejected by Schneiderman’s office, for emails between staff members of the attorney general and Ms. Cunningham since 2011 revealed lobbying by Ms. Cunningham on behalf of her clients.

The emails showed that Cunningham arranged meetings between Schneiderman’s office and the health care company Castlight and the hospital operator Health Quest in 2011 and 2014 respectively, according to Crain’s.

Officially, Ms. Cunningham, who has deregistered as a lobbyist, is only a strategic consultant for the attorney general’s office, making her exempt from disclosure standards that apply to lobbyists.

“They released some emails this weekend, they didn’t release all of them.”

Cahill has charged Schneiderman with falsely labeling Cunningham as a state contractor to make her eligible for the Freedom of Information Act’s inter-agency exemption, and Cahill says that there are no records confirming Cunningham’s status as a contractor.

“When the chief law enforcement officer of the state is conferring a phony status on the political consultant, that gives reason for skepticism and absolute distrust in state government,” Cahill said.