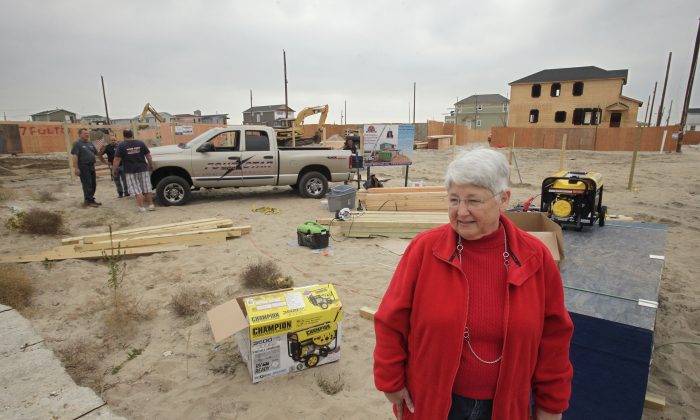 Marie Lopresti visits the site of her former house in Breezy Point, Queens, New York, Oct. 17, 2013. "I still dream of my old house," she said. "I see everything. But you have to look forward. You wish you could go back, but you can't." (Mark Lennihan/AP)
New York

NEW YORK—Superstorm Sandy was not the first powerful storm to smack New York City, and according to most scientists, it will not be the last. In fact, many scientists predict storms will increase in intensity, leaving our city with only one choice: adapt or move.

Some residents who lost their homes are thinking twice about rebuilding in flood-prone areas, but Mayor Michael Bloomberg made it clear he would not abandon the waterfront.

City and state-run buyout programs will give some residents options if they want to leave. Resilient structures will be built on some of the land, while other parts will be returned to Mother Nature.

Homeowners looking to rebuild are using the city’s Build it Back program, which is helping them wade through the red tape of federal funding, as well as comply with the new construction standards of shore-living.

Still, the process is slow. At almost the one-year anniversary, the frames of just a few homes are beginning to pop up in badly burned Breezy Point. On Staten Island, only one home has officially been purchased by the city through the acquisition program.

HUD has only allocated $1.77 billion in federal funding of the $16 billion the city will be eligible for, and the city has set aside $700 million for the Build it Back program. Only those deemed priority (homes with severe damage and inhabited by households earning less than $80,000 per year) will be eligible for this money, although another round of federal funding is expected soon.

“We would like the process to move faster, and they would certainly like it to move it faster,” said Deputy Mayor Cas Holloway on Oct. 22. “I think I would say to those families, ‘We are sorry it is not finished yet, but please be patient.’”

After two straight years of big storms, the city has thus far weathered this year’s Atlantic hurricane season with no incidents, but we are not expected to be so lucky in the years to come.

To answer longer-term questions, Mayor Bloomberg commissioned a report, “A Stronger, More Resilient New York,” which was released in June. The 400-plus-page report lists 257 recommendations, including: building levees, berms, and floodgates, as well as protecting utilities and transportation infrastructure.

If completed on time, all the recommendations are expected to cost the city $19.5 billion.

Many of the projects must be studied before construction even begins, meaning years will go by before protection measures are put in place.

Knowing future storms are on the way, and could hit before long-term barriers are built, the city has vastly improved its emergency preparedness. The city has invested in 14 safety boats, 200 light towers, 35 generators, 70 mobile fuel trucks, and new emergency food contracts with vendors.

Hospitals have improved their evacuation plans, new shelter locations are being selected that would allow for longer stays without interfering with schools, and better plans to help the elderly and disabled who could be trapped in the event of a power outage, are a few of the new measures in place to prepare for the next storm.

“While you can never have every single thing covered, a lot of these recommendations have been put in place, and a lot of new resources have been purchased and are ready to be allocated if we needed them,” said Holloway.

The next decade will be spent changing how and where we build things—but we will go on.

Just as we have before, New York City is made of people who can take a hit, and come back stronger. Much like the Sept. 11 attacks, the storm united the city. People offered perfect strangers a place to stay, a blanket to keep warm, or a power outlet to charge their phones.

As we always do after a tragedy, New York City has come back stronger, better, and more resilient.