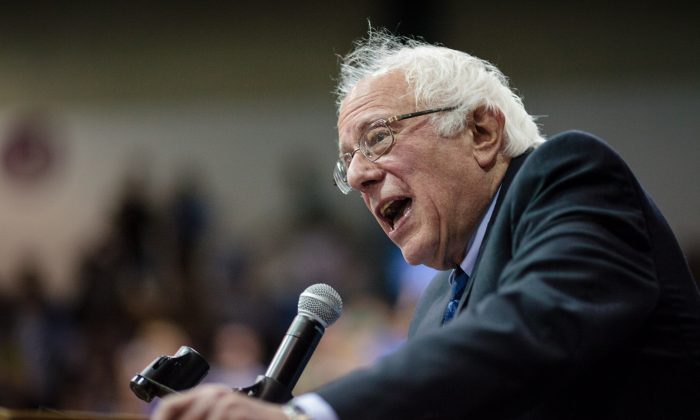 'He will work seven days a week, night and day, to make sure Donald Trump is not president'
By Steven Klett

The Democratic primaries are still going on, and Bernie Sanders has said—against long mathematical odds against Hillary Clinton—that he is planning to stay in the race until the Philadelphia convention in July.

However, after the convention, then what?

On CNN, Sanders’s campaign manager Jeff Weaver said that regardless of the convention’s outcome, the campaign will work overtime to ensure that Donald Trump isn’t president:

“Well, he certainly has said that he will do everything—he will work seven days a week, night and day, to make sure Donald Trump is not president, and I’m confident that he will do that,” said Weaver. “Bernie Sanders, as you know, is a very effective campaigner on the stump.”

Weaver continued, saying that the message would focus on how another Republican president would be a “disaster” for the working and middle class:

“And I think he’ll take the message to them that Donald Trump would be a disaster for working-class and middle-class families in this country,” Weaver continued. “Putting the Republicans back in control of Washington is not a good strategy.”

The Sanders campaign manager also responded to Donald Trump, who has been tweeting repeatedly that Sanders should run as an independent in the general election:

“And that’s what he’s gonna do,” Weaver said of Trump. “Trump obviously would like a third-party candidate on the left so that he could try to divide the vote and win. But I think what you’re gonna see is unity to defeat Trump.”

“Bernie Sanders is being treated very badly by the Dems. The system is rigged against him,” Trump wrote. “He should run as an independent! Run Bernie, run.”

Bernie Sanders is being treated very badly by the Dems. The system is rigged against him. He should run as an independent! Run Bernie, run.

Weaver also defended Sanders’s choice not to drop out of the Democratic primary, saying that it’s helping keep the conversation about issues that matter to voters:

He continued, predicting a bloody battle between Clinton and Trump.

“It’s gonna be a mudslinging contest. The Trump people, the Republican Party, all their super PACS, are gonna engage in character assassination no matter who the nominee is, and that’s what it’s gonna be focused on. It’s unfortunate, but as long as there a Democratic primary process going on, people are talking about issues that are important not only to Democrats but to Americans as a whole.”