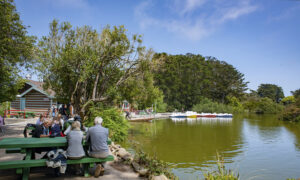 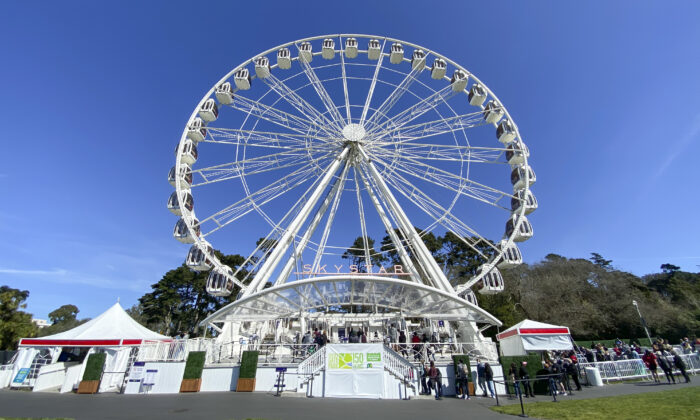 The original agreement for the 150-foot-tall Ferris wheel was one year, as part of the park’s 150th anniversary.

Those in favor of the wheel staying have said that it brings a quality of life to the city’s residents, more people to the city to promote local businesses, and money for the park.

While the ride had been closed due to a surge in COVID-19 cases, operations resumed on March 4.

Those against it staying have said the generator makes too much noise. The committee addressed that concern by proposing to replace it with a quieter one.

Now that the wheel is open again, people are already lining up for their turns.

“We haven’t been out to the Golden Gate Park for over a year because of the pandemic,” Jose Acosta from San Jose told NTD Television. “I’d like to bring the grandkids next.”

He rode with his wife, Gloria.

“It’s a perfect day, beautiful view, and they’re really quick about moving the line. The line is a lot longer now,” she told NTD Television.

“It was a little scary, but it was a good ride,” Krystal Hannaford told NTD Television.

“It’s pretty relaxing. Going up while they’re loading, you feel a little bit like, when’s this thing going to get moving again? But once it goes, it’s really smooth and totally chill. Great view of the city. You could see the headlands over the Marin and the top of the bridge and everything. Yeah, it was cool,” Todd Reynolds told NTD Television.

On a clear, sunny day, riders can see the city, ocean, and Golden Gate Bridge from the top.

The wheel is 15 stories tall and has 36 ventilated gondolas that are sanitized between uses.

“When people have been at the park, looking at the wheel not being able to turn, everybody has written to us and said time and time again, ‘We remain hopeful that we will get through this COVID pandemic and can’t wait to take a ride.’ And I think that’s why we’re here today,” Finck said.

Tickets are $18, and San Francisco residents receive a 15 percent discount. All San Francisco public school graduating seniors can get free rides this summer from June to September with a valid ID.

The committee will consider a permanent location for the temporary structure in the future.

The wheel, a state-of-the-art attraction, is special in that it can be taken down and transported, Finck said.

It was disassembled in Cincinnati, Ohio. The parts were put in 14 huge trucks and moved to San Francisco.

“I watched them assemble it, and it was quite amazing,” Finck said.

He said it took three days to put all the gondolas together and three weeks to assemble the entire wheel.

“I would say that if you have a fear of heights, don’t worry. You’ll be fine,” Finck said. “I have vertigo, and it’s okay.”