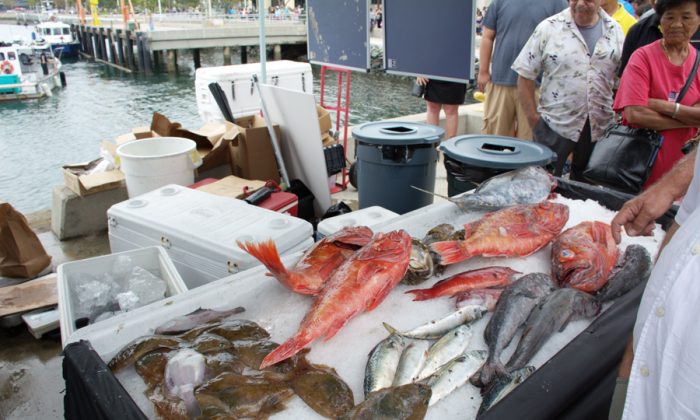 Some selections of fresh fish at the Tuna Harbor Dockside Market, San Diego, Calif., on Aug. 2. (Jane Yang/Epoch Times)
US

Tuna Harbor Dockside Market opened its first day of business on Aug. 2 after a year-long effort of obtaining permits.

Dave Davis drove half an hour all the way down to the harbor from north county Rancho Bernado, getting to the market a little past 8 in the morning. After waiting for 2 hours he got to the front of the open-air counter—formed by ice trays, ice chests, and folding tables.

When he was offered a California Yellow Tail—weighing 18 pounds—Davis showed a little hesitation because of the size, but after reflecting on the 2-hour wait, he took the deal.

“We were expecting more boats and more fish, according to what the TV portrayed. We were not prepared for this long wait,” he said.

But as a fish lover, he said he’s still happy. “It is quite a good price, saving 7–8 dollars a pound,” said Davis.

The opening of the market was a joint effort between San Diego County, the Port of San Diego, and the local commercial fishing industry.

“We have not had anything like this for the past 30 or 35 years, citizens of San Diego County are receiving this exceptionally well,” said Cox.

Cox said fish is one of the healthy foods that aligns with the Live Well San Diego program the county is promoting.

“This is going to serve as a catalyst for the commercial fisherman, who have been dwindling in numbers for the last few years. I think you are going to see a resurgence because they see there is an opportunity for making a living,” added Cox.

The Tuna Harbor Dockside Fish Market will open weekly on Saturdays from 8 a.m. to 1 p.m.