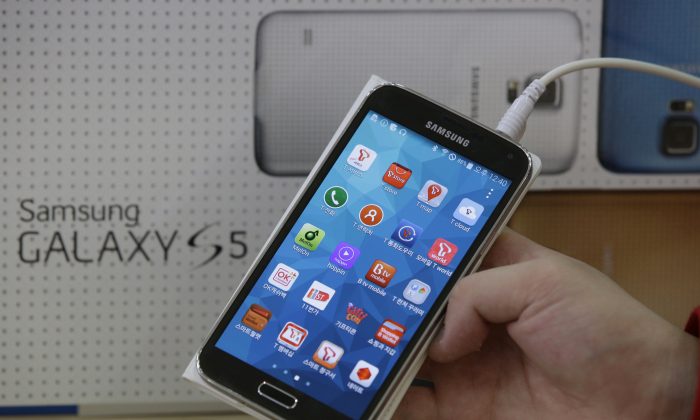 In this March 27, 2014 file photo, an employee shows Samsung's Galaxy S5 smartphone at a mobile phone shop in Seoul, South Korea; the Android 4.4.4 KitKat update is being rolled out to the phone. (AP Photo/Lee Jin-man, File)
Tech

A new Samsung Galaxy S5 Android 4.4.4 KitKat update is hitting the phone to solve problems and also to prepare it for the upcoming Voice over LTE technology.

The Android Kitkat updates have been hitting the phones of major carriers but the last several either caused new bugs or didn’t solve all of them, prompting the 4.4.4.

The new update includes fixing the problem of an incorrect number of unread emails on the notification screen, and audio of the Bluetooth headset, and a camera shutters sound issue.

More tracking features have also been added to the S-Health, including Weight, Sleep, Stress, and Coach.

The update also includes tech that prepares the device for the upcoming VoLTE technology, which enables calls to sound better and clearer while having users talk on the phone while being able to use the Internet at the same time.

While Verizon’s S5 is the first model to get the 4.4.4., the other models are expected to receive it soon.

Meanwhile, some variants of the Galaxy S4, Galaxy Tab 3 and Galaxy Tab 4 have been getting the Android 4.4.2 KitKat firmware recently.

The latest Google Android build is Android 4.4.4 KitKat, but that is only coming out for the very latest Samsung devices such as the Galaxy Alpha and the Galaxy Note 4–and the Galaxy S5–at present.

In the United States, Sprint are working on releasing the Android 4.4.4 KitKat for the Galaxy Note 3 and Galaxy S5, while T-Mobile could be rolling out the update for the Galaxy S4.

Some United Kingdom carriers and Optus in Australia could also be making the update available for the Galaxy S5 and Galaxy S5 LTE-A.

Samsung could eventually release the Android 4.4.4 KitKat update to its other phones, but at present, Samsung users will have to stick with a slightly older Android build.