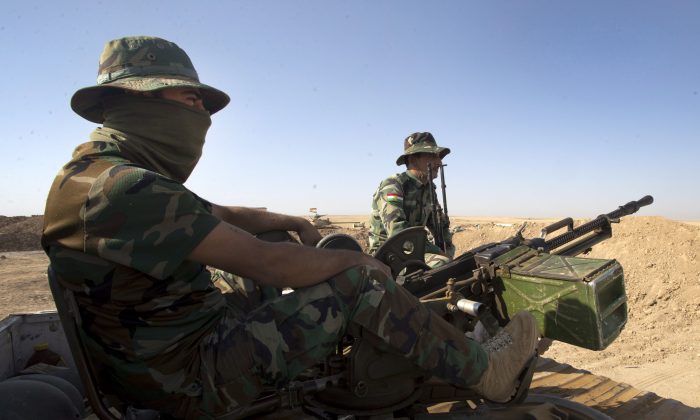 Peshmurga soldiers man their positions at the front line in the fight against ISIS on Sept. 4, 2014, in Kalak, Iraq. (The Canadian Press/Ryan Remiorz)
Canada

No decision yet on when Canadian airstrikes against ISIS will end, defence minister says
By The Canadian Press

OTTAWA—Defence Minister Harjit Sajjan toured the front lines in the war against the Islamic State of Iraq and Syria on Monday, Dec. 21, downplaying the significance of last week’s major offensive and managing expectations on what Canada’s rebooted training mission will look like.

The front line was ruptured in perhaps as many as five places as ISIS units unleashed a torrent of artillery and massive armoured suicide bomber trucks, which the Americans call Frankentrucks.

The assault was rolled back the next day with the help of airpower—including Canada’s CF-18s—and U.S. coalition commanders estimate as many as 200 extremists were killed in the failed attempt to break the stalemate, which has gripped the line in northern Iraq since the summer of 2014.

Sajjan said the extremist offensive was not unexpected and the coalition is anticipating more.

“Our troops on the ground have worked very closely with the peshmerga to be able to prepare for eventualities like this, and their preparation and training paid off,” he said.

Some commentators in the international media have suggested the attack, involving hundreds of ISIS fighters, signals a shift in strategy by the terror organization. Sajjan said conversations are taking place trying to anticipate what the militant group will do next.

But the issue of the Trudeau government’s plan to withdraw Canada’s warplanes hasn’t come up in conversations with either Iraqi officials in Baghdad or the Kurds, said Sajjan.

“The irony is, I haven’t had one discussion about the CF-18s or discussing our contribution from the humanitarian side of things,” he said in a conference call with reporters from Irbil.

Instead, Sajjan says they’ve talked about how Canada can refocus its military commitment with a beefed-up training mission, and he’s given some suggestions on contributions the country can make, including ideas he hadn’t previously considered.

Getting a better understanding of what is happening on the ground allows us to think about what we can bring to the table.
— Defence Minister Harjit Sajjan

“Getting a better understanding of what is happening on the ground allows us to think about what we can bring to the table,” said Sajjan, who later in the call referenced medical training and battlefield casualty clearing as specialities that were needed.

Prime Minister Justin Trudeau has pledged Canada will “do more than its part” in the military effort against ISIS, which implies a bigger contribution. Sajjan tried to manage those expectations Monday, saying it was the type of equipment and expertise that was important.

“I just want to caution everybody. Number is not a good metric to judge in terms of capability brought to the fight,” he said.

Not Leaving Allies in Lurch

The former Harper government committed Canada to a combat mission, via parliamentary mandate, until the end of March, but Sajjan suggested the Liberals would not be bound by that—meaning the airstrikes could end sooner, or carry on longer depending on discussions with the U.S.-led coalition.

“The decision to end airstrikes is not based on that deadline. It’s about what future capabilities we’re bringing to the fight,” he said.

The end date to the bombing, which Foreign Affairs Minister Stephane Dion keeps insisting is “weeks away,” will be predicated on the schedule of allies and not leaving them in the lurch.

“We are coming very close to that understanding and a decision will be coming not too far in the distant future,” Sajjan said.

He said he’s also had a lot of discussions about the sectarian divide in Iraq—the root cause of the violence—and he’s convinced that more needs to be done to address it.

He skated around the question of whether Canada would contribute to a possible British-led mission to take on ISIS, which has taken root in the chaos of Libya.

The international coalition, Sajjan confirmed, is already looking at widening its scope outside the principal battleground of Iraq and Syria to places where nascent extremist organizations are taking hold.

The Sinai Peninsula between Egypt and Israel was one example he cited. It also happens to be the place where ISIS claims to have planted the bomb that brought down a Russian airliner.

The international community needs to get sharper at analysing and predicting where ISIS is likely to rear its head, he said.