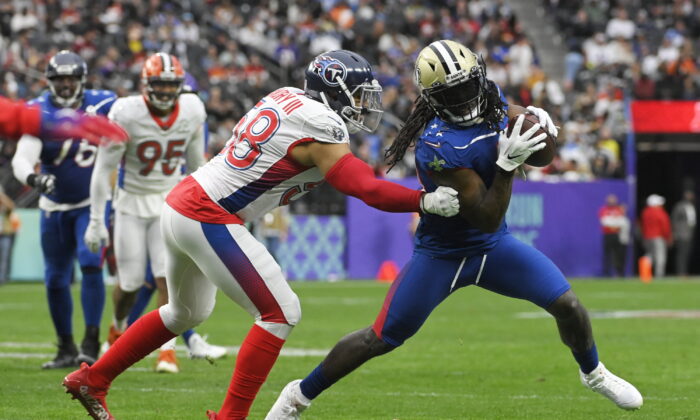 NFC running back Alvin Kamara (41), of the New Orleans Saints, rushes against AFC outside linebacker Harold Landry (58), of the Tennessee Titans, during the first half of the Pro Bowl NFL football game, Sunday, Feb. 6, 2022, in Las Vegas. (AP Photo/David Becker)
Crime and Incidents

New Orleans Saints running back Alvin Kamara was arrested in Las Vegas, and police have charged him with “battery resulting in substantial bodily harm,” according to a news release from the department.

The Las Vegas Metropolitan Police said they were dispatched at around 5:50 p.m. local time Saturday to a hospital where an individual reported a battery at a nightclub. Detectives later determined that the victim was battered by Kamara, who was in Las Vegas due to the NFL Pro Bowl.

Police said Kamara was taken into custody without incident after playing the Pro Bowl, making four catches for 23 yards. He was booked at the Clark County Detention Center on a charge of “battery resulting in substantial bodily harm,” officials said.

Court records did not identify his attorney. A conviction on the charge could result in a sentence of one to five years in state prison.

Please click on the document below for more information on the arrest of Alvin Kamara. This investigation is still ongoing, anyone with any information about this incident is urged to call 702-828-3204 or contact @CrimeStoppersNV pic.twitter.com/QoUY9tEQT1

In a statement to news outlets on Monday, the NFL said, “We are aware of the matter but will decline further comment at this time. ”

Kamara and his representatives have not issued a comment on his arrest. The Saints have not responded to a request for comment.

Kamara is one of the top running backs in the NFL. He had 1,337 yards from scrimmage and nine TDs this season on the way to being picked for his fifth Pro Bowl in five seasons as a pro.

According to court records, Kamara is due back in court in March.

No further details about the alleged incident were made available.