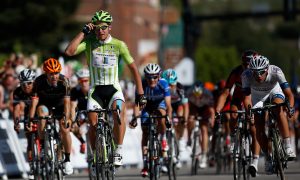 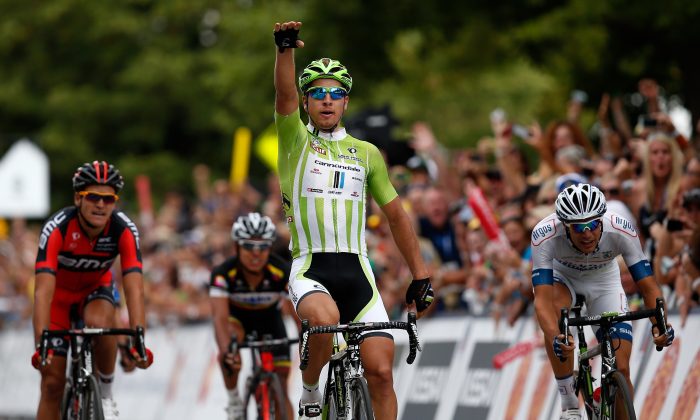 Sagan showed once again that not only can he sprint almost as fast as the sport’s fastest sprinters, he can climb well enough to stay near the best climbers; on any course with a hill hard enough to wear down the pure sprinters, Sagan can get over the hill in time to catch and pass everyone else.

Stage Six, 185.4 km from Loveland to Fort Collins, had a single huge categorized climb in the middle with a series of short rollers in the final third. A 15-rider break formed 55 km into the stage and lasted intact until the final 30 km, when a group of five riders attacked. These five: Thomas Dekker (Garmin-Sharp,) Simon Geschke (Argos-Shimano,) Mick Rogers (Saxo-Tinkoff,) Joshua Edmondson (Sky,) and Javier Megias (Novo Nordisk) rode together for ten K , then Geschke dropped. The remaining four lasted until the last six K, when Rogers and Megias attacked, but the whole break was caught with 5.3 km left in the race.

This wasn’t a case of the peloton just waiting until the end to catch the break; this break was big enough, and well-coordinated enough, to make the peloton really work. Cannondale, with help from BMC, had to ride hard for the entire race, and were particularly tested in on the rolling hills near the finish, when several riders tried to attack.

Cannondale was motivated by the thought of another stage win for Sagan, and he paid them back for their hard work. There was no one left to give him a leadout, so Sagan had to make his own way in the last kilometer. The Cannondale rider was sixth coming under the 1-K banner, when Saxo Tinkoff’s Rory Sutherland tried to spoil the show, streaking out of the pack on the far right and very nearly stealing a win.

Sutherland made it to the last hundred meters when Sagan and BMC’s Greg van Avermaet caught him. Avermaet ran out of gas in the final 50 meters and Argos-Shimano’s Luka Mezgec blasted by to take second, but no one could catch Peter Sagan.

“Today I am very, very happy for the victory, and thank to all my team mates, because it was all day on the front, pulling on the front to catch the breakaway,” sagan told NBCSN after the stage. “In the sprint, there were no riders from my team because everyone had been pulling on the front before, and it was a little bit crazy because of so many riders from other teams trying attacks in the last three kilometers. I did a good sprint, and I won.”

The General Classification was not affected; Tejay van Garderen will enter the final stage with a 90-second lead over team mate Mathias Frank, who is another 12 seconds ahead of Garmin-Sharp’s Tom Danielson. Barring injury or mechanical failure, van Garderen will win the face by more than four times the biggest winning margin of any previous USA Pro Challenge.

Sagan has to be considered the favorite for Sunday’s final stage as well—a 121-km criterium twisting through downtown Denver, it will almost certainly end with a bunch sprint, and Sagan is the strongest in the field. Ironically, the Slovakian champion said before the race that Stage Seven was the only one he thought he might win; the rest looked too hard.