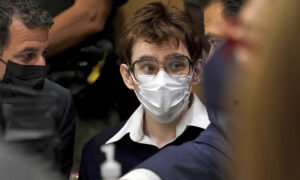 The Smith family has been identified as the five persons in Saco, Maine who were found dead over the weekend.

Police said that it may be a murder-suicide.

All five members of the family–Heather and Joel, the parents, in their mid-30s, and their three children, boys ages 12 and 7 and a 4-year-old girl–were killed by gunshots.

“All indications are that no one outside of the family was responsible for the deaths,” Maine Department of Public Safety spokesman Steve McCausland said in a press release. “These are not accidental deaths.”

The bodies of the adults and one child were in one bedroom while the bodies of two children were found in two other bedrooms. The gun was found by Joel’s side.

Police later confirmed to the Press Herald that Joel, 33, killed his wife Heather, 35, and their three children, Jason, Noah, and Lily.

Heather and Joel in a photo from last year. (Facebook)

A body is moved from a crime scene at an apartment complex where five members of a family, including three children, were found dead authorities said Sunday, July 27, 2014, in Saco, Maine. Investigators said a family friend had contacted a worker at the apartment complex worried about the well-being of the family. The worker entered the apartment and discovered one body, then immediately called police. (AP Photo/Robert F. Bukaty)

Police said no suicide note was found, but investigators said the wife had told a family friend the night of the shooting that Joel Smith recently had threatened suicide. The friend later contacted an apartment complex worker to express concerns about the family’s well-being, leading to the grisly discovery, investigators said.

Heather Lemmers, who lives next door to the family at the complex, RiverView Apartments, said that she was good friends with the family and that Joel was a good person who once jumped into the Saco River to save her son when he was struggling in the water.

Other neighbors said that Heather Smith had just begun drinking heavily and partying on weekends.

“At first she was kind of the weekend warrior, partying on weekends. Then it kind of rolled over into weekdays,” said one, Aaron Petrin.

“(Joel Smith) was extremely against that.”

The family had moved from Arizona because of the sour economy, said Joel Smith’s mother, Jerys Caruthers-Thorpe, of Scottsdale, Arizona. Heather Smith also was getting help for substance abuse, Caruthers-Thorpe said.

“I know something had to have snapped because Joel never would have done that in his right mind,” she said.