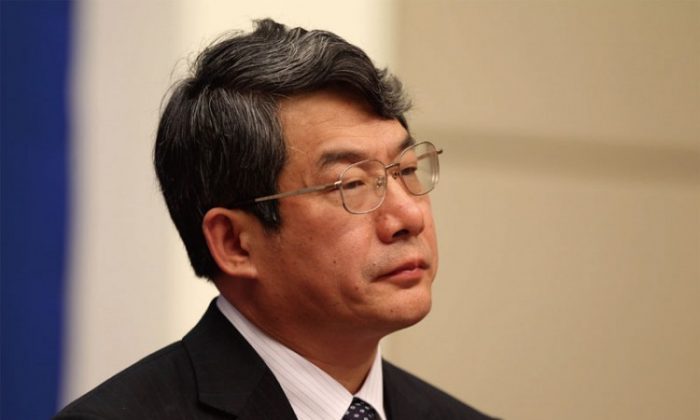 Liu Tienan, former director of the National Energy Administration, has been removed from his post. (New Epoch Weekly Archive)
China

The former director of the National Energy Administration in China, a lucrative job post that allows for the extraction and distribution of enormous rents in the state-dominated energy sector, has been sacked just days after an investigation against him was formally announced.

The downfall of Liu Tienan, who was also deputy director of the powerful National Develop and Reform Commission and a member of its Party Leadership Group, is ostensibly part of Party leader Xi Jinping’s anti-corruption drive. According to analysts of the Chinese Communist Party’s form of blackbox politics, it is also likely to be the latest purge of officials allied with former Party leader Jiang Zemin.

State mouthpiece Xinhua announced the investigation by the Central Commission for Discipline Inspection for “serious disciplinary violations” on May 12. On May 14 the Central Organization Department removed Liu from all his posts.

Allegations of Liu’s offenses were first leaked by Chinese journalist Luo Changping late last year. Luo, the deputy editor of Caijing, a respected business magazine, spent a year investigating Liu and exposed what he found on his Weibo microblog last December. These include Liu’s fabrication of credentials, bribes received through his wife and son, and fraudulent loans from Chinese banks for overseas acquisitions.

A few weeks later, on Jan. 31, state-run media Global Times reported that Liu was being “interviewed” by central authorities. In March he was removed without explanation from his position as head of the energy administration. Chinese media began reporting on May 14 that Liu had approved over 50 projects in the three months since he was accused of corruption.

Liu is widely believed to have acted as personal financial manager to Jiang Zemin and Zeng Qinghong, a communist power broker. He was promoted to director of the energy administration in 2010. It is accepted as a plain fact by many observers of China’s secretive political system that Jiang Zemin’s faction has controlled China’s energy sector for decades. In 2006, for example, Caijing magazine in China reported that 92 percent of the stock of the Shandong Luneng Group, a state-owned energy conglomerate worth nearly $9 billion, was sold in secret to two private companies for a mere fraction of its real value. The son of Zeng Qinghong, Zeng Wei, was reported to have benefited handsomely from that deal. It is transactions of that kind that Liu could likely have faciliated for his political patrons, according to independent Chinese analyst Shi Cangshan, based in Washington.

Shi says the ousting of Liu Tienan is very likely a message aimed at higher-level officials that are resisting other reforms Xi Jinping is attempting, including that of the controversial re-education through labor system.

“This move serves as a warning to Jiang himself and to the Political and Legal Affairs Committee,” Shi said. The PLAC is a powerful and secretive body that controls all law enforcement in China.

The new Party leadership has made several announcements inferring that the forced labor system will be reformed this year, with the first on Jan. 7. The news was initially reported by state media Xinhua, China Central Television, and People’s Daily, but the posts were deleted within a few hours. The news appeared widely in opinions and commentaries, but at the location on the People’s Daily website where the initial announcement about the closing of the system was first posted.

Then, early the following morning on Jan. 8, an article appeared at the very top of People’s Daily which included, near the end, the line: “Jiang Zemin has always cared about reform in the electricity industry, and asked for a ‘compromise.'” That remark was delivered orally to Zhang Baoguo, Liu Tienan’s predecessor as director of the National Energy Administration, the People’s Daily article said.

According to Shi Cangshan the message was meant for Xi Jinping: Jiang was saying that he wishes for a “compromise” in an attempt both to protect Liu, who had the previous month just been outed by Luo Changping, and to have Xi soften his attempts to reform or close the labor camp system.

Last month, most recently, the labor camp reform issue resurfaced with an April 6 report in Lens Magazine exposing severe torture at Masanjia labor camp, that was picked up by domestic and overseas media, and corroborated details independently recounted by Falun Gong practitioners more than 10 years ago. State-run media later denied the report, and Lens Magazine may have since had its publication delayed by a week, according to Chinese media.

Suppression of media exposing the torture of Falun Gong could be attributed to Jiang’s faction, since he initiated the persecution against the spiritual practice during his leadership in 1999.

Analyst Shi Cangshan added that Jiang’s faction used his influence to secure immunity for Liu Tienan in January. However, as Jiang is at odds with central Party leaders over the re-education through labor reform, the announcement of Liu’s downfall by Xi’s faction is not surprising; Shi said it represents the elimination of one of the many nodes of Jiang’s wide ranging network.