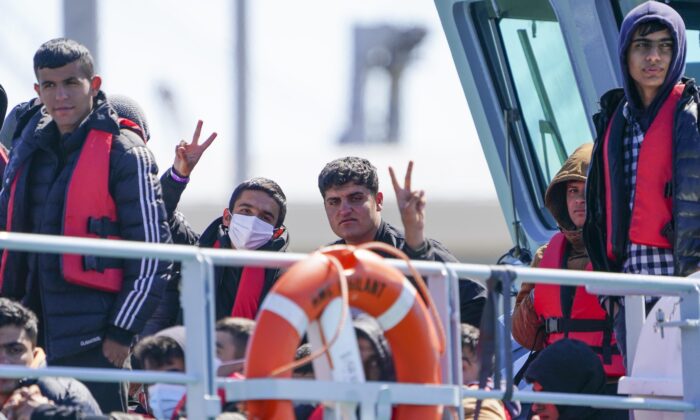 Illegal immigrants who crossed the English Channel from France give V signs on UK Border Force boat Valiant as they arrive in the port of Dover, England, on June 14, 2022. (Chris Eades /Getty Images)
UK

Matthew Rycroft, the department’s permanent secretary told MPs on June 22 that, since the policy was announced, the number of illegal Channel crossings have not been rising as much as the Home Office’s projection for this year.

Appearing before the Home Affairs Committee in the House of Commons, Rycroft said: “There is already possibly the beginnings of some deterrent effect visible.”

But he added: “It’s too early to say if that is because of the Rwanda policy or due to the weather.”

The top civil servant acknowledged that policy could cause changes in the pattern of illegal immigration by encouraging people smugglers to try new routes into the UK that are even more dangerous than the current ones.

He said: “I do agree we should be thinking about irregular migration in general and all of the different routes, and it would be a pyrrhic victory if this set of policies were successful in closing down the small boat route, but created something even more dangerous. That would not be a victory at all, so we need to make sure we’re thinking about this in the round.”

Not a single illegal immigrant has been deported to Rwanda yet, as the first planned flight was grounded due to an intervention by the European Court of Human Rights (ECHR).

Home Secretary Priti Patel said the ECHR intervention was “disappointing and surprising” but the government remains “committed to this policy.”

Commenting on reports of some Home Office staff refusing to implement the policy, Rycroft told MPs: “It is irrelevant whatever any civil servant thinks about a policy, if the government of the day has determined that policy.”

He said civil servants are “here to serve the government of the day, that is duly elected.”