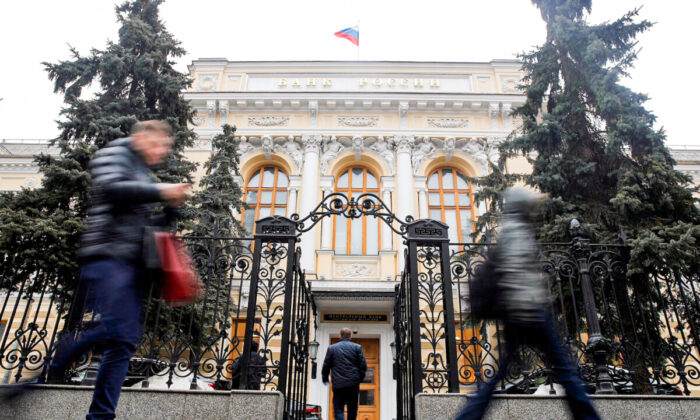 Stock trading at the Moscow Exchange partially resumed on Thursday, with the MOEX Russia Index closing the day with gains. The stock market last traded on Feb. 25, a day after Russia invaded Ukraine.

The Bank of Russia had stated on Wednesday that trading activity would restart on Thursday for 33 shares, with the market remaining open between 9:50 a.m. to 2:00 p.m., Moscow time. Short-selling is banned. The MOEX index rallied on Thursday, closing with a 4.37 percent gain.

Oil firm Rosneft rose by 16.97 percent, aluminum company Rusal by 15.81 percent, oil giant Lukoil by 12.41 percent, and Norilsk Nickel by 10.17 percent. Aeroflot, one of the top airlines in Russia, saw shares drop by over 20 percent to eventually close with a loss of 16.44 percent.

Russia’s stock trading was slammed by U.S. Deputy National Security Adviser for International Economics Daleep Singh as a “Potemkin market opening.” Singh pointed out that Russia has only allowed 15 percent of listed shares to trade, prohibited foreigners from selling shares, and banned short selling. The government is pouring in money, thereby “artificially propping up” the prices of shares that are trading.

“This is not a real market and not a sustainable model—which only underscores Russia’s isolation from the global financial system,” Singh said in a statement on Thursday.

Large bids to buy Russian shares were observed during the trading session, BCS brokerage said in a note while adding that the overall sentiment was supported by confidence that the country’s finance ministry will buy stocks. Moscow has committed to use up to 1 trillion rubles ($10.4 billion) from its National Wealth Fund to purchase stocks in a bid to support the share market.

Meanwhile, foreign investors are banned from selling stocks until April 1, preventing them from dumping Russian securities and exiting the market. The absence of foreign investors—a major force—has raised concerns about markets being skewed.

“There will be an illusion of a working, recovering Russian stock market, even though a huge class of players in the market—foreigners—won’t have the opportunity to sell,” said Vladimir Kreyndel, CEO of ETF Consulting, a Moscow firm that advises issuers of exchange-traded funds.

According to the Moscow Exchange, 58.2 percent of trading volume on Thursday was accounted for by 567,000 private investors, with the remainder being accounted for by 121 professional participants.

Jeroen Blokland, founder and head of research at Dutch investment firm True Insights, warned against giving too much credence to the Russian stock market.

“A lot of people seem eager to invest in #Russia. Perhaps based on the idea that #valuations will revert to pre-#war levels,” Blokland said in a tweet. “But this is unlikely to happen. It’s very difficult to assign fundamentals, but what we do know is that (self)#sanctions will remain for a very long time.”