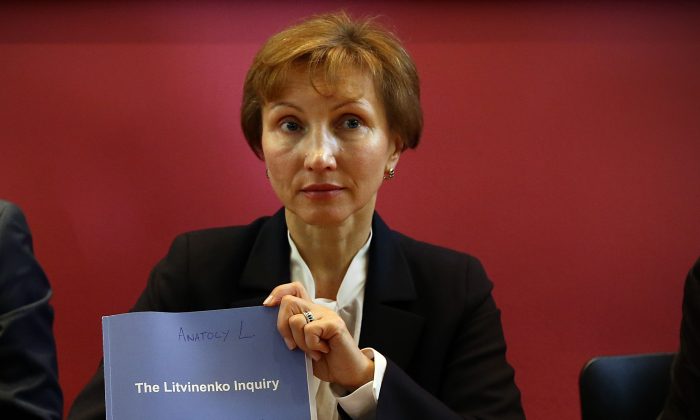 Marina Litvinenko holds a copy of a report at a press conference in her lawyer's office after receiving the results of the inquiry into the death of her husband Alexander Litvinenko, in London, England, on Jan. 21, 2016. Former KGB officer Alexander Litvinenko was poisoned in 2006 with radioactive polonium-210 in the U.K. having fled Russia after criticizing President Vladimir Putin. (Carl Court/Getty Images)
Europe

The final report from the long-running inquiry into the death of former Russian agent Alexander Litvinenko has re-ignited the controversy over what is undeniably the biggest assassination case seen in the U.K. for decades.

The story has all the ingredients for a spy thriller, from secret poison to international conspiracy, but its implications are far from trivial.

At the heart of the matter is the strange death in November 2006 of Alexander Litvinenko, a fugitive Russian ex-secret service officer, who was granted political asylum in U.K. in 2003. He had been poisoned by a rare radioactive substance called Polonium-210.

Given Litvinenko’s reputation as a fierce critic of the Russian President Vladimir Putin and his security services, it was alleged from the start that the Russian state was behind his murder. A formal accusation has now been made to that effect in the report released as a result of the public inquiry into his death.

These findings could not have come at a worse time for the U.K. The outcome of all kinds of international crises depends on cooperation from Russia, and it’s clear that the Kremlin is in no mood to play ball.

The Russian security services have been suspected of many assassinations over the decades and are known to extend their deadly grip to the enemies of the Russian state far beyond its borders.

However, Litvinenko’s case has struck a chord. The manner in which he died and the fact that the murder took place in London was bound to raise public alarm. And perhaps more significantly, the alleged personal involvement of Russia’s president is an extremely serious accusation.

There were plenty of reasons, highlighted by the inquiry, for the Russian secret services to target Litvinenko. Near the top of the list was probably his work for British intelligence, a cardinal sin for an ex-KGB officer. This is why part of the evidence for the inquiry remains off limits to the public.

Equally significant is the fact that Litvinenko had a well-established track record of publicly accusing the Russian security services, and Putin himself, of high-profile crimes. He spoke of apartment blocks being bombed in Russia in 1999 as justification for starting the second Chechen War. He also suggested Putin had links to organized crime.

It is possible that Putin could have known or even approved of the assassination plot, although Litvinenko was a relatively low-level operative, which makes it surprising that Putin would be especially concerned about him. Litvinenko’s allegations about the president were already public knowledge by that point too, and the Russian authorities had not proffered much reaction. What’s more, the nature of Litvinenko’s death gave him sufficient opportunity to release any new evidence against Putin if he had it. All this points to revenge as a motive, which is perhaps not entirely unexpected given the circumstances.

Russia’s reaction to the report has been as straightforward as it was predictable. The foreign ministry accused Britain of turning a “purely criminal” case into a political matter by launching the public inquiry in the first place. It accused the inquiry of lacking transparency and said it had reached a highly prejudiced conclusion.

The Russian ambassador to London, Alexander Yakovenko, called the linking of the Litvinenko murder to the Russian state a “provocation.” Putin’s spokesman simply said that the Kremlin had no interest in the inquiry.

Relations between the U.K. and Russia hit rock bottom after the annexation of Crimea and Russia’s involvement in the Donbas war. This, incidentally, was what tipped the British government into approving a public inquiry into Litvinenko’s death, something it had been reluctant to do previously.

The Five Worst Poisons on Earth: From Polonium to Mercury

The big question, though, is what will happen now. The British government talks of action, but can it really do anything? This is, after all, an old story and there is nothing in the report that was not already known to British intelligence or the British government.

Russia, meanwhile, is a significant global player and will have to be engaged with in one form or another, not least in the quest to resolve the conflict in Syria and defeat the Islamic State.

Russia is not the only country in the world to fall well short of Western values on human rights, the rule of law, and democracy, but it is perhaps the most troublesome for Europe, not least because of its geographical proximity to the EU and its huge size and military power, including nuclear weapons.

This makes what happens in Russia of equal or even greater importance to similar trends in China or Saudi Arabia. So, the Litvinenko findings bring forth the dilemmas for the British government it hoped it could bury: how to reconcile moral principles with hardcore realities of international politics and economics.

Alexander Titov is a lecturer in modern European history at Queen’s University Belfast in the U.K. This article was originally published on The Conversation.