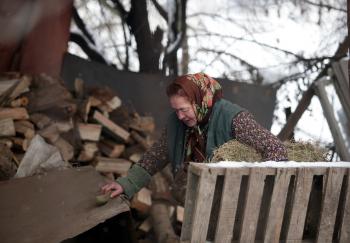 An elderly woman carries a hay at her home near Sofia, Bulgaria on January 8, 2009. Bulgaria struggled to adapt to the gas shortage today as a total cut in Russian deliveries, on which it is entirely dependent for its natural gas needs, ran into its third day. (Boryana Katsarova/AFP)
Europe

Russian and Ukrainian delegations met with EC president Manuel Barroso and EC energy chief Andris Piebalgs in Brussels, on Jan. 8 to resolve the gas dispute. After a day of talks the meeting ended in failure after Gazprom representatives refused to accept the conditions of an independent expert team to monitor the transit system in Ukraine.

“It is now up to the Russian side to consider what additional elements they would need to restore full supply, and I will continue to be in contact with the Russian side,” said a disappointed Andris Piebalgs, EC chief of energy.

Earlier in the day, the EC questioned the creditability of both Russia and Ukraine as trading partners as, in the middle of a severe winter, the gas dispute completely shuts off the Russian gas supplies that distribute through the transit pipelines in Ukraine.

The dispute has generated consultations between the heads of states and governments of several countries, as well as the chiefs of Russian gas company Gazprom and Ukraine transit company Naftogas.

“What is at stake here is the credibility and the reliability of Russia as a supply country and of Ukraine as a transit country,” said the president of the EC Manuel Barroso through spokesperson Johannes Laitenberger, after meeting the Ukraine delegation.

Russia supplies close to 40 percent of the gas imported by the European Union (EU), mainly through pipelines that transit through Ukraine. The dispute concerns gas price, transit costs, Ukrainian debts, and accusation of gas siphoning by Ukraine. It led to a total shut down of supplies on Jan. 7. Ukraine dismissed the Russian accusation. The EC proposed creating a team to monitor the gas flow through Ukraine, which both countries, in principle, have accepted.

According to Borys Tarasiuk, head of Ukraine committee for European integration, Russia has a political agenda in the dispute. Moscow wants to “punish Ukraine because of the Orange Revolution,” and is “furious about Ukraine’s eventual membership in NATO and EU,” said Tarasiuk at the parliamentary hearing in Brussels on Thursday.

The bulk of the Russian gas goes to Germany and Italy, but several highly gas-dependent Eastern European countries are badly hit by the dispute. Bulgaria is dependent on gas for domestic and industrial use and is therefore hit the hardest.

According to reports by Sofia Echo news media, Bulgaria’s natural gas supply is only sufficient for home heating and many schools and factories are now shut down.The Bulgarian representative at the European Parliamentary hearing, Vladko Todorov Panayotov said the situation is very critical.

Bulgaria has issued a statement that it may seek compensation for damages caused by the gas cut.The EC blames both countries for not fulfilling their obligations to European consumers and demands immediate restoration of gas supplies.

If the gas supply is not restored immediately the EC will consider alternative sources of supply for the future long-term needs of Europe.The International Energy Agency (IEA) supports the criticism in a statement saying that it is unacceptable that third party European countries that are good, long-term customers are victims of the dispute.

The cut-off creates hardships during one of the coldest winters in Europe.An agreement between on an independent expert team to monitor the transit system in Ukraine seems to the issue to be solved before Russian gas can flow again.

Plieberg is hopeful that a solution can be reached. He said that European observers will be in Kiev the next day to continue negotiations and he expects full cooperation from the Russian authorities.