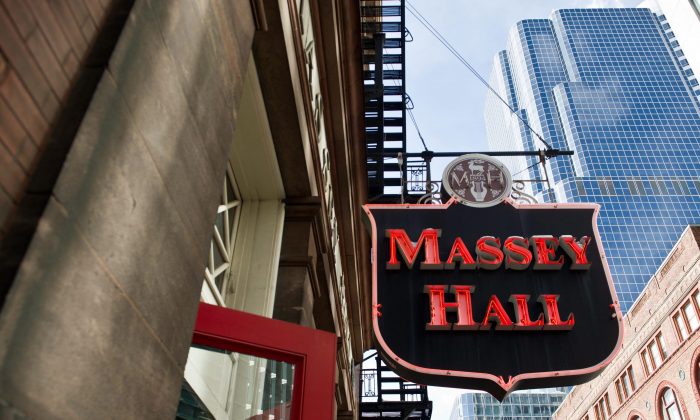 The exterior of Massey Hall. The auditorium, which is undergoing an extensive renovation, has been the site of several legendary live recordings. It was also the venue where Bob Dylan went electric for the first time with The Band in 1965. (The Canadian Press/Galit Rodan)
Canadian Content

TORONTO—Rush frontman Geddy Lee’s memory of attending his first show at Toronto’s Massey Hall remains spring-water clear–and what stands out is the sound quality that was swamp-water muddled.

It was June 5, 1968, and a then 22-year-old Lee was desperate to see British rock royalty Cream, even though his friends weren’t.

“I couldn’t get anyone to go see Cream with me,” Lee told The Canadian Press in one of Massey’s spartan dressing rooms on Feb. 23.

“I sat in the balcony. And I don’t think their PA system had arrived because they played onstage and Jack Bruce was singing through the Massey Hall crappy little announcement system.”

“It was really strange,” he added, laughing.

Such whimsical glitches may become less common as the venerable Massey Hall—a piece of Toronto iconography since it was built back in 1894—undergoes a seven-year, $135-million revitalization.

“Phase one” of that operation began this week, with improvements including a first-ever loading dock, a modernized back of house, a backstage space for artists, and technical tweaks.

Massey Hall has been the site of several legendary live recordings, including Charlie Parker and Dizzy Gillespie’s “Jazz at Massey Hall,” Neil Young’s “Live at Massey Hall 1971” and Rush’s own “All the World’s a Stage.”

Lee talked to The Canadian Press about the relationship between the historic venue and his beloved power-prog trio.

CP: Rush played here for the first time in October 1974. What was going through your head?

Lee: I was just awed by the whole situation. It was hard to believe that we were actually playing here. It’s funny: when you’re in the audience, the place feels huge. But when you stand onstage and look out, it just feels so much smaller than you remember it. You cannot reconcile that it’s the same place you used to sit in the audience and watch bands.

CP: Coming back in 1976 to record three gigs for “All the World’s a Stage,” were you nervous?

Lee: Oh, we were nervous. Because we’d never done a live album before. And all you think about when you’re recording live is: don’t make a mistake. And of course, that forces you to make mistakes. You always walk off feeling like you could do better.

CP: That album is still a fan favourite.

But all those things that bother you about your performances seem to disappear into the passage of time.

CP: There are a lot of beautiful old venues. Why is this one specifically so loved?

Lee: When you’re from Toronto, we don’t have many historic buildings left. We have a terrible history of tearing down some of our nicest buildings. There’s very little protection built into the fibre of Toronto in terms of its architectural point of view.

It’s a rare thing in Toronto to find a theatre that has had so many historic concerts in it, and it’s still around. I think that’s why as Torontonians we want to protect it.

It’s almost like a memorial plaque in some way to music.