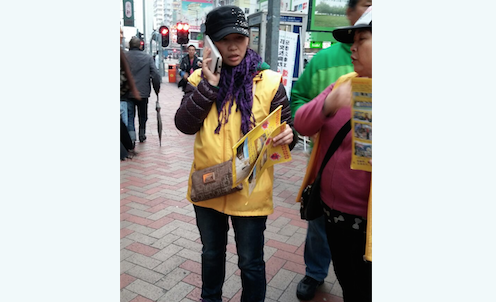 Ng Man-ting, a member of the Hong Kong Youth Care Association, dresses in yellow and pretends to be a practitioner of Falun Gong on Argyle Street, Mongkok, in Hong Kong, while handing out propaganda literature against the practice. Ng was recently sent to prison for 12 days. The sentence was suspended for a year. (Epoch Times)
China

For the first time a member of a band of agitators, who have operated for years in Hong Kong on behalf of a branch of the Chinese secret police, has been handed a criminal sentence for her conduct.

Ng Man-ting (Wu Wenting in Mandarin Chinese), an active participant in the Hong Kong Youth Care Association, a front group for the Chinese Communist Party’s extralegal police agency, the 610 Office, was given a sentence of 12 days imprisonment, suspended for one year. She will also be fined HK$1,000.

Among Ng’s activities were pretending to be a Falun Gong practitioner and handing out fliers defaming the practice, though she was not charged with that conduct. According to a summary of court proceedings on Aug. 25, Ng was charged with “common assault” and “fighting in a public place.”

The Youth Care Association, as it calls itself, had conducted similar conduct since its formation in 2012. A reporter in China with the Apple Daily, a popular newspaper in Hong Kong, went to the address in the city of Shenzhen, across the border from Hong Kong in mainland China, on the group’s registration records. She found that the Youth Care Association shared an address with the city’s 610 Office, and that both buildings were staffed by the same people.

Other clues indicate that the group has an origin in China, and has been used to extend the persecution of Falun Gong, a long-running campaign against the spiritual group, into Hong Kong. Falun Gong is a Chinese spiritual practice that includes meditation and moral teachings. It has been persecuted in mainland China since 1999.

The incident that landed Ng in the courtroom this time took place on Feb. 18, where she lashed out at a woman who came to photograph her as she handed out anti-Falun Gong propaganda material. The woman, Xiao Li, was an actual Falun Gong practitioner who sought to document the activities of Ng and her colleague.

“The first time they hit me, it was in the side of the stomach. Then someone hit me in the back of the head with fliers. Then they started punching and kicking continuously. She didn’t stop until a 60-year-old man who was walking by told her to stop. The man yelled ‘Hey, why are you hitting her? Why don’t you stop?’ She stopped, and I immediately called the police.”

Sun Weifang, another member of the Hong Kong Youth Care Association, then accused Xiao Li of being the attacker. All three were taken to the police station—but Xiao Li was able to demonstrate the fact of the matter after undergoing a medical examination.

Later, video from a surveillance camera at a nearby store demonstrated irrefutably what had taken place.

The magistrate, Don So Man-lung, sentenced her quickly, especially given that she had a prior record.

Xiao Li said she was pleased with the outcome. “Falun Gong practitioners follow the principles of truthfulness, compassion and forbearance. We don’t hit people. I believe the law in Hong Kong is just, so someone who hits someone else should be punished—that’s normal.”

Sun Weifang, Ng’s accomplice, will be tried on Oct. 14.

Feet in the Face

A wide range of activities, some short of direct violence, some hovering on the edge, and some far crossing the line, have been carried out by members of the Hong Kong Youth Care Association against practitioners of Falun Gong for the last couple of years.

Some of these have been documented on video and put online. In one of them, in April 2013, a Youth Care member places herself in a chair in front of a meditating Falun Gong practitioner, then takes off her shoes, and after hoisting one foot on top of her other leg, gives herself a foot massage, in front of the face of the meditator.

In another case in March this year a woman grabbed a Falun Gong practitioner’s protest poll, shaking her back and forth harshly, punching her in the mouth, and then pushing her to the ground. To make it look like she was the victim, the attacker then also took a tumble. Given that the entire incident was caught on video, viewers did not appear convinced. One particularly angry YouTube user wrote, “These communist dogs are shameless to an incredible degree.”

Shoving Falun Gong adherents above, and placing smelly feet into their faces, is at least a de-escalation from an earlier form of intimidation. Another video from 2013 shows Youth Care personnel brandishing a large meat clever, and threatening to use it.

The attacks and activities of the Youth Care Association appear to be part of a package of increased pressure on Hong Kong’s civil society by elements of the Chinese Communist Party and backers.

Chow Wai-tung, a former district legislator and community director of the Democratic Party, however, thinks that despite the Communist Party’s vast efforts, the response from Hong Kong is only likely to get more defiant.

“The recent anti-Occupy Central rally showed that Communist Party has put in a lot of money and used quite a lot of manpower,” he said, referring to a rally through the streets of the city recently which opposed another movement, Occupy Central, that proposes coordinated civil disobedience as long as communist authorities continue to put strictures on the city-state’s ability to nominate its own candidates to run for the office of Hong Kong chief executive.

Chow said that, “In the end, all they’ve accomplished is just insulting themselves and waking up the Hong Kong people.”

Chow accompanied Xiao Li to the courtroom on Monday, and was pleased with the outcome.

“Many judges and righteous people in Hong Kong will not help the Youth Care Association members. The police won’t help. The Department of Justice will want to prosecute. The overall environment will change as a result of what they’re doing.”

With research by Frank Fang and Matthew Robertson.