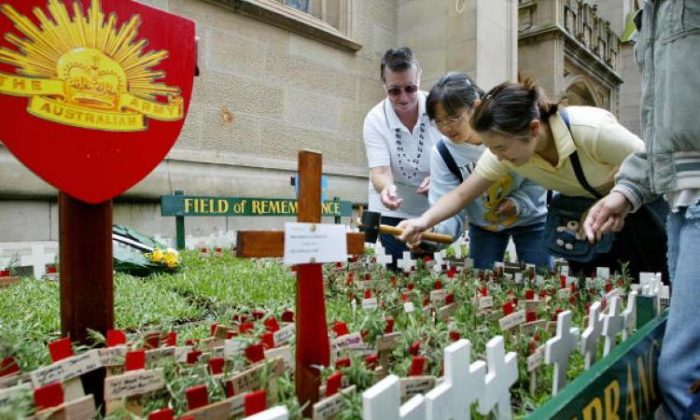 The field of remembrance run by the War Widow's Guild NSW, for ANZAC Day, 25 April. Small wooden crosses each with a sprig of rosemary in memory of those lost. (Rob Elliott/AFP/Getty Images)
News

This ANZAC Day, veterans all over Australia will don a sprig of Rosemary in remembrance of our brave soldiers who, 96 years ago, clambered up the cliffs of Gallipoli in a desperate bid to gain a beachhead and in doing so, crushed bushes of wild Rosemary underfoot, releasing that unforgettable aroma.

Since ancient times, Rosemary has been associated with memory. Rosemary was traditionally grown on the graves of ancestors in western Asia to remember them and invoke their guidance and protection.

As a herb of memory, it also became the emblem of fidelity for lovers and was entwined in the wreath worn by brides.

In Europe, Rosemary is still used for remembrance at weddings, funerals, for decorating churches, as incense in religious ceremonies or for occasions where a solemn pledge is being made.

This symbolic association with memory is well grounded in the fact that Rosemary’s strongly aromatic oils stimulate brain function, penetrating through to memory stimulus cells.

For those who wish to make good use of the memory herb to aid their studies, drink Rosemary tea regularly for a few months before an exam and you will find that it will sharpen your recall and comprehension.

Rosemary has an affinity with the sympathetic nervous system and, as such, is a very effective muscle relaxant, especially after a long hard day of physical exertion.

Taken as a tea or some leaves left to soak in bathwater, Rosemary will help to release any muscular tension that could later turn into pain and stiffness.

Rosemary has been hailed as a cure-all throughout many cultures and ages, but on April 25, for Australians, it will not only symbolise memory, but also mateship—Lest We Forget.