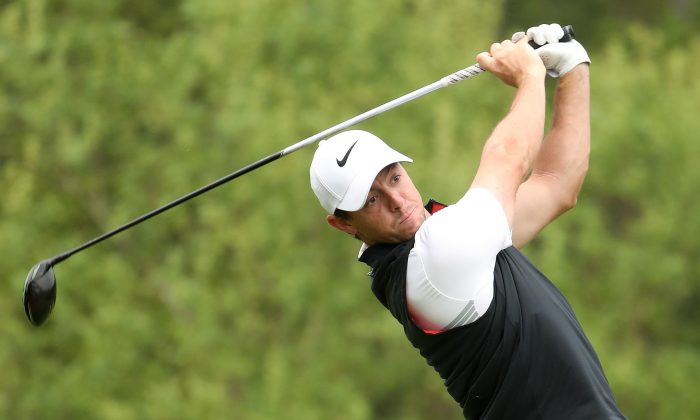 Northern Ireland’s Rory McIlroy tees off on the third hole during the third round of the World Golf Championships-Dell Technologies Match Play at the Austin Country Club on March 24, 2017 in Austin, Texas. (Christian Petersen/Getty Images)
Golf

The most exclusive club in golf is the career grand slam club. Only five golfers in the history of the sport have achieved it. Rory McIlroy aims to be the sixth with a win this week at the 81st edition of The Masters at Augusta National Golf Club.

The 27-year-old has attained plenty in the world of professional golf, but the green jacket, symbolic of the win, has never rested on his shoulders.

McIlroy’s last major win, his fourth, came in the 2014 PGA Championship and for the Northern Irishman the desire to once again reclaim his top spot in the world rankings could be helped considerably with a win this week at Augusta.

The main issue is that McIlroy is fully aware of the anchor that’s been around his neck since the meltdown at the 2011 event when he led by four strokes before collapsing in the final round with an 80. He ultimately finished in a tie for 15th.

Since that big time meltdown, McIlroy has finished in the top ten in the last three Masters. The main issue is: Can Rory’s putter—always a problematic issue—be sound enough to carry him through the gruelling four rounds?

At the Arnold Palmer Invitational just a few weeks ago, McIlroy was in contention with stellar play through the weekend rounds. At the final hole, Rory was on the fairway of the demanding par-4 18th. His approach left him a 30-footer for a key closing birdie. Inexplicably, he three-putted and his opportunity for victory vanished.

McIlroy has been known for streaky play. When his game is working on all levels, he is fully capable in dominating any event. Case in point: claiming last year’s Fed-Ex Cup by winning the Deutsche Bank and then the Tour Championship. To his credit after the total collapse at the 2011 Masters, McIlroy rebounded superbly in the next major—the US Open at Congressional—winning with a new four-round record score and earning his first major triumph.

Taking home the green jacket would mean McIlroy would join such illustrious names such as Gene Sarazen, Ben Hogan, Gary Player, Jack Nicklaus, and Tiger Woods as the only men who have captured all of the game’s premier events in a lifetime.

The main concern for McIlroy is whether he can handle the swiftness of the famed greens at Augusta National. When the course is playing especially firm and fast, the premium in being able to consistently make putts within 10-feet becomes a necessity. That’s a dimension in McIlroy’s game prone to inconsistency and when the misses start happening can be difficult to overcome.

The early weather forecast may turn out to be an advantage for McIlroy as showers are expected for much of the tournament and the moisture could make the course play longer and softer. Given his past performance in such conditions that could prove to be most advantageous for him.

After returning from a rib injury earlier in 2017, McIlroy returned to near top form but the world of golf has also seen a clear push by others to the top of the golfing throne. Dustin Johnson is now at peak form and the favorite in winning his first green jacket this week.

Will the pressure be off McIlroy and on others?

That’s doubtful. Media will be quick to ask him about what winning at Augusta would mean, and so long as he remains in contention, the focus will be squarely there on him to finally attain the key title that has eluded him to date.

The number two player in the world has shown in his professional career the capacity to put together stellar play when called upon. At last year’s Ryder Cup Matches McIlroy was the anchor player for Team Europe.

Achieving a career grand slam would elevate McIlroy to a level no other European golfer has achieved and that includes the likes of such recent greats as Nick Faldo and the late Seve Ballesteros.

Augusta National has been famous in denying other past great players. The names of Greg Norman, Lee Trevino, Tom Weiskopf, and Johnny Miller, to name just four, come quickly to mind. Each possessed solid golf skills, yet each came undone through either poor decisions in key moments or simply having a clear mental block when coming to golf’s first major of the season.

McIlroy has not shown the capacity for consistency at the highest level as Tiger Woods, but frankly no golfer has been able to do that. There’s little question when on form he can dominate and win convincingly. Augusta awaits Rory—can 2017 be the year he finally breaks through?

We shall soon see.