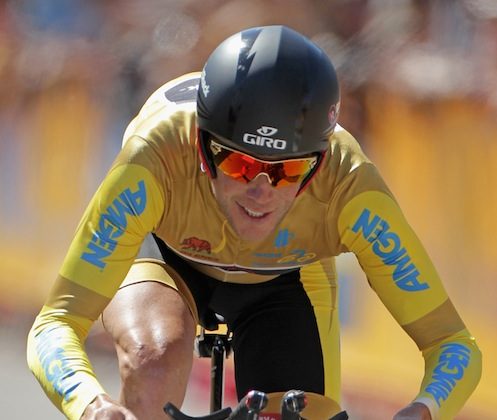 Katusha’s Joaquin Rodriguez launched an attack in the final kilometer of the hilly Stage Six of the Tirreno-Adriatico cycling race, beating the General Classification contenders over the line for the ten-second time bonus and the stage win.

The time bonus won’t matter to Rodriguez, who is seventh in GC, 50 seconds out of first. It mattered very much to Liquigas’s Vincenzo Nibali; Nibali used up his teammate peter Sagan completely in an attempt to catch the various attacks in the final five kilometers, and then burned out his own legs chasing Rodriguez. The win and the ten second time bonus might have given Nibali the leader’s blue jersey; instead the Liquigas rider finished second, earning six seconds and trailing race leader Chris Horner by that same margin.

It was close though; in fact, the top ten riders were so close at the line that they all got the same finishing time. A few more meters and Nibali might have earned the Maglia Azzurra. As it is, if he used too much energy in the final five kilometers, he might suffer in tomorrow’s time trial, which will decide the stage.

After the race Rodriguez told Eurosport.com, “I had good luck today. I finally decided to have a go after making the team work right up until the last kilometers. Great work by the likes of [teammate Daniel] Moreno. Of course I tried to get through and I had the power to hold on—it was a long, long, long last kilometer, and I am glad I held on.”

The Spanish racer, riding for a Russian team, later told Cyclingnews.com, “I’m very happy with today’s victory. In the last two stages I was a little disappointed: they were good courses for me but I couldn’t win, because my rivals were in a better shape.

“Today in theory was a better stage for Oscar Freire, more suitable to his characteristics, but when I saw he was not ahead I tried to win. My only chance was to anticipate the sprint and attack from far out, because in the bunch there was Peter Sagan and I couldn’t compete with him in a sprint.

“It was an important victory: now I’m more persuaded that the work we did between Tour of Oman and Tirreno-Adriatico was good. I proved I’m getting better and better and for Vuelta al Pais Vasco I’ll be ready to take some other good results.”

Before Stage Six started, Philippe Gilbert, Matt Goos and Edvald Boasson Hagen all withdrew from the race. Mark Cavendish got into an early breakaway, had some fun, and retired after it was shut down. They are all off to prepare for the big Milan-San Remo Classic; they had no chance to win another stage in the Tirreno, and didn’t want to waste their legs.

Stage Six was a lumpy 84 km loop around the city of Offida, with six hilly 16.2 km laps within the city to finish. There was only one really painful climb, 2.5 km at seven percent (with ten-percent ramps)—a perfect stage for a breakaway to stay away and take the win.