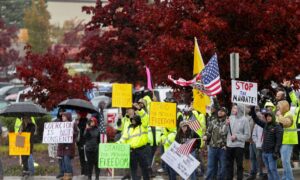 At least 16 people were arrested in Rochester, New York on Sunday as people threw rocks and bottles at police officers following the Puerto Rican Festival.

Police officers responded with pepper balls, a helicopter, and other tools and crowd-control methods.

Rochester police spokeswoman Sgt. Elena Correia told the Democrat and Chronicle that 16 people had been arrested as of 10:15 p.m. in “post-festival activities.” Many of the arrests were for disorderly conduct.

[View the story “Riots in Rochester, NY: 16 Arrested and 100 Officers Deployed” on Storify]