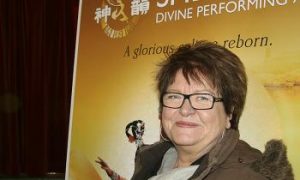 Robot Hummingbird Gets Thumbs Up as Flying Spybot (Video)

The Nano Hummingbird, a miniature spy drone commissioned by the U.S. Department of Defense, has passed its flight tests, according to California-based technology company AeroVironment Inc. (AV).

The tiny aircraft has a wingspan of 6.5 inches, and weighs 19 grams (2/3 of an ounce), complete with batteries, motors, video camera, and communication systems.

It carries its own power source and uses only its flapping wings for propulsion. Currently it can fly for around eight minutes, and is about the same shape and size as a hummingbird.

This micro-ornithopter can fly sideways, forward, and backward; it can precision hover, and climb and descend vertically; and it can rotate clockwise and counter-clockwise, all via remote control.

It has met all seven of DARPA’s requirements, issued by the Pentagon, including flight at 11 mph, through doorways, and withstanding 5 mph sidewinds.

A flight demonstration video on YouTube shows the craft flying into a building and collecting video footage. In fact, the pilot can use the video image stream to fly the bird "heads-down" without a visual on it.

"This is a new form of man-made flight," said project manager Matt Keennon, according to the Los Angeles Times, adding that the machine was inspired by nature or biomimicry.

“The success of the NAV [Nano Air Vehicle] program paves the way for a new generation of aircraft with the agility and appearance of small birds,” said Dr. Todd Hylton, NAV program manager at DARPA, in a statement.

The hummingbird model is a prototype, but within 10 years, Keennon hopes to have developed a spybot that can carry out complex reconnaissance missions, and be less conspicuous.

"I'm not a bird expert, but a sparrow seems to be better," Keennon said, according to the Times.