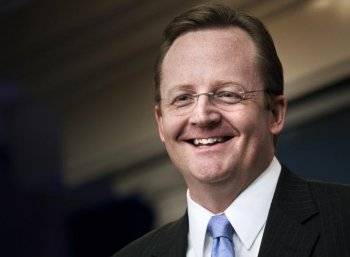 Robert Gibbs, White House press secretary, smiles during a daily press briefing at the White House Jan. 5 in Washington. Gibbs announced that he would step down from his position at the White House in February to work on the upcoming 2012 campaigns. (Brendan Smialowski/Getty Images)
US

Robert Gibbs to Step Down as White House Press Secretary

By Annie Wu
Print
Robert Gibbs announced on Wednesday he will resign from his position as the White House press secretary.

Gibbs told New York Times that he will leave the post in early February to lend outside assistance to Obama's re-election campaign.

Gibbs, 39, has worked for Obama since April 2004, when Obama was running in the Senate primaries in Illinois. Though Gibbs is leaving the White House, he will remain a close adviser to the president.

“For the last six years, Robert has been a close friend, one of my closest advisers and an effective advocate from the podium for what this administration has been doing to move America forward," Obama said in an official statement issued on Wednesday afternoon.

"I think it’s natural for him to want to step back, reflect, and retool. That brings up some challenges and opportunities for the White House—but it doesn’t change the important role that Robert will continue to play on our team.”

No successor has yet been named, but Gibbs said the decision will likely be announced within the next two weeks. An administration official listed to the Times several potential replacements, including Jay Carney, communications director to Vice President Joseph Biden, as well as deputy press secretaries Bill Burton and Josh Earnest.

After leaving the White House, Gibbs “plans to try out the speaking circuit,” according to the Times. He will be represented by Washington lawyer Robert Barnett, who has Obama and Bill Clinton among his list of clients.

The press secretary’s resignation comes in the wake of other major shifts in the Obama administration. David Axelrod, Obama’s senior adviser, will also exit the White House to work on Obama’s re-election campaign. He will be replaced by David Plouffe, who was Obama’s chief campaign manager in the 2008 presidential elections.

Obama will also be announcing his choice for chief of staff in the coming weeks. The main contenders are Pete Rouse, who replaced Rahm Emanuel when he stepped down in October 2010, and William Daley, a former secretary of commerce.