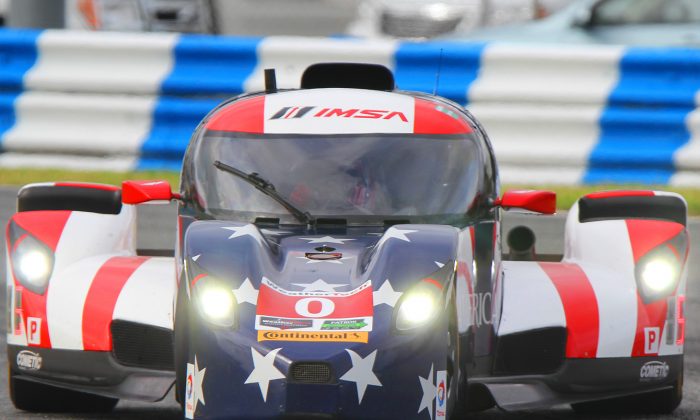 Roaring Through the Fog

DAYTONA BEACH, Fla.—Saturday, the second day of the 2016 IMSA WeatherTech Sportscar Championship’s Roar Before the 24 test at Daytona Speedway didn’t actually dawn. Instead, the thick mist which filled the air glowed a bit.

Not that anyone—drivers, crews, fans—was upset to see thick fog instead of the pouring rain which had been forecast. Even though the mist was so thick that the morning session had to be postponed ninety minutes, the alternative—cold, wet, miserable, and slippery, with cars sliding off the track or running at much reduced paces—was far less desirable. Instead, everyone had time for an extra cup of coffee.

When the first practice session finally started at 10:30 a.m. it brought a major surprise: The Delta Wing DWC-13, the weird triangular experimental car which has been struggling to find pace since its debut two seasons ago, led the field with the fastest lap. No, seriously.

The DeltaWing turned a lap of 140.137 at 127.985 mph, .045seconds quicker than the second-placed Michael Shank Racing Ligier-Honda, which had topped the time charts in both Friday sessions.

Third, and fourth, cane another surprising pair: the two Mazda prototypes, now powered y turbocharged gasoline engines instead of diesel, were only .0657 and .0740 seconds off the DeltaWing’s pace. These four cars were the only ones to break into the 1:40s in the somewhat shortened morning session.

The afternoon, instead of the predicted rain, brought intermittent sunshine for an hour or so, before the clouds once again took over the sky, creating perfect driving conditions: warm enough to heat up ythe tires quickly but not so warm that the track got greasy, without glare or wind.

Times reflected the conditions, with the Taylor brothers and Max Angelelli in the #10 Wayne Taylor Racing Dallara-Corvette DP leading the field with a 1:40.032 at 128.119 mph, quickest lap of the day and third quickest of the event to date. The #55 Mazda of Tristan Nunez, Jonathan Bomarito, and Spencer Pigot turned in the second quickest time of the session at 1:40.055 and 128.090 mph, fourth quickest of the two days.

Third in the fourth session came yet another surprise: the #2 Extreme Speed Motorsports Ligier-Honda lapped the 3.56-mile track in 1:40.179 at 127.931, beating out two-time series champion the #5 Action Express Coyote-Corvette DP by .095 seconds.

Times were tight throughout the field; the top eight cars broke 1:41 and the top nine were within a second of the leader.

The rain never showed. A few drops managed to coalesce out of the thick atmosphere early in the session, but for the most part the moisture stayed diffuse, not quite low enough to be fog, and not quite drizzle. Times were the quickest of the weekend, with Oliver Pla in the #60 Shank Racing Ligier lapping at 1:39.687, and with both the DeltaWing (driven by Katherine Legge) and the WTR Dallara-Corvette (with Max Angelelli at the wheel) also breaking 1:49.

After two seasons of struggling to maintain parity between the wide variety of chassis and engines in the Prototype class, Saturday’s results mist have been deeply satisfying to IMSA officials. The top ten cars represented eight different chassis and seven engine manufacturers run by eight different teams.

The Roar is only a test, and despite regulations which penalize sand-bagging, it is possible that most teams are running a little conservatively to avoid being hit too hard by Adjustment of Performance regulations before the season-opening Rolex 24 at Daytona.

However—even if no one is really running flat-out (and in the case of cars like the Mazdas, the DeltaWing, or the SMP Racing BR01, here for the first time, it is unlikely in the extreme that these cars were holding anything back,) the closeness of performance throughout the weekend would seem to indicate that even if everyone has seed in hand, they are very, very close in capacity.

Any one of a dozen cars seems to have the pace to win. The Rolex might come down to reliability, preparation, and luck—and the rest of the season looks to be the best in the series’ history.

But let’s not get carried away. After all, the Roar is only a test. The real game doesn’t begin until the green flag waves on Saturday, Jan. 39, to start the Rolex 24.

When the WeatherTech SportsCar Championship was formed out of the American Le Mans Series and the Rolex Sports Car series, fans were afraid of one thing: that ALMS GT racing, widely regarded as the best on the planet, would be altered to suit the whims of the new owners, and ultimately ruined.

NASCAR, little loved in sports car circles, showed its business acumen by letting WeatherTech officials run their own show. The upshot is, WeatherTech still offers what many consider to be the best GT racing around, bar none.

Results at the Roar bear that out. AF Corse’s new Ferrari 488, Ganassi Racing’s new Ford GTs, Corvette Racing’s CR.7s, and BMW’s brand-new M6s have all taken turns leading the pack. As has been the case since the days of ALMS, all the cars are within two-tenths of a second of each other, and it is impossible to predict who will be fastest next.

AF Corse was quickest on Saturday afternoon by .003 (yes, three-thousandths); Corvette was fastest in the morning by a relatively huge .017. BMW split Friday’s session between its two cars. Night practice was a bit more relaxed. BMW topped the night session by .083 seconds.

Finally, What Fans Have Been Waiting For

Old-school fans of the sport might prefer a here’s the rules, build what you can, a run-what-you-brung ruleset—build a car which fits in this box and weighs at least this amount and let’s see who’s fastest. But to be commercially viable and relevant to the manufactures, nowadays a series has to include BMW, which wants to race a mid-sized front-engined GT car, as well as Ferrari and Audi who want to bring serious mid-engined sports cars, and Porsche, who insists of entering a rear-engined dinosaur (albeit a very quick and highly refined dinosaur.)

To keep all these cars competitive, the series has to very carefully adjust weight, aerodynamics, and fuel capacity. And to be honest, the end result is some of the most competitive GT racing on the planet.

It’s hard to find fault with series management on this score: they do a very tough job and produce an extremely high-quality product, and one which is very well suited to the current market, and to television.

After two seasons of tinkering, the WeatherTech Championship has finally reached a level of refinement sufficient that one could say that it is a worthy successor to its two component series, the American Le Mans Series and the Rolex Sports Car series. Perhaps WeatherTech has not matched either series at their peaks, but considering where both series were in the first years of this decade, the new championship is a valid replacement.

And next year, all that goes out the window when new prototype rules take over, with only four approved chassis suppliers, though thankfully, freedom in the engine compartment.

IMSA has worked hard to make WeatherTech a serious sports car championship. Now that they have finally succeeded, an even bigger challenge looms. This is not to say that IMSA won’t take the change in stride and put on even better racing in 2017—but it might mean that the series is in for another year or two of adjustment and adaptation and refinement to get back to where it is today.

Which all boils down to: Enjoy every minute of every race of the 2016 series. Savor it as it passes.

Fans can follow the rest of the Roar via live timing on IMSA.com

The 2016 IMSA WeatherTech Rolex 24 at Daytona takes the green flag on Saturday, Jan.30. Tickets are available through the Daytona International Speedway website, or by calling 1-800-PITSHOP.