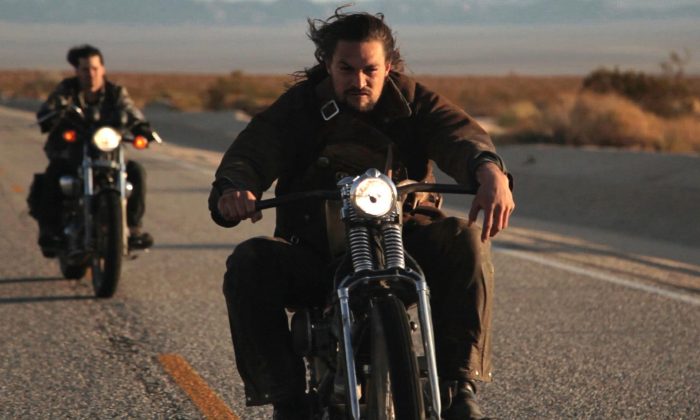 ‘Road to Paloma’: Jason Momoa Rides Through the Mojave in Native American Drama

It is like “Easy Rider,” except there is a reason for the angst and defiance. When Wolf’s mother suffered a brutal attack, the Feds declined to prosecute the case. It was just too much work.

However, when Wolf took the law into his own hands, they made his capture a top priority. There will not be a lot of sunsets for the biker and his new traveling companion to ride off into during Jason Momoa’s directorial debut, “Road to Paloma.”

Wolf is a lot better than self-destructive rocker Cash at being a drifter. Nevertheless, they ride together for a while, sharing some colorful encounters on the road.

Wolf has secretly picked up his mother’s ashes from his estranged reservation policeman father, to spread in accordance with her wishes. Anticipating he might do something like that, Special Agent Williams grabs a reluctant local white copper and heads into the Mojave after him.

Wolf and Cash will see some scenery worthy of John Ford on their journey, stopping along the way for some bare-knuckle brawling and a little bit of loving. For Cash, that means lap dances, but Wolf prefers using his mechanical skill to seduce Magdalena (Lisa Bonet) when her vintage car breaks down. It is nice for a while, but the law is never far behind.

Frankly, “Paloma” is far more sensitive and moodier than you would expect from Jason Momoa’s WWE-distributed motorcycle-powered directorial debut. Small in scope, it is much more closely akin to his Sundance series “The Red Road” than “Game of Thrones” or “Conan.”

They both feature Native American themes, as well Momoa’s wife, Lisa Bonet. Regardless, in “Paloma,” the cinematic vistas and alienated vibe are surprisingly effective. On the other hand, Momoa largely wastes the timelessly cool character actors Lance Henriksen and Wes Studi (who has a bit more to do than the former).

As his own lead, Momoa is a serviceable renegade-brooder. He also generates some decent heat with Bonet, as well they should. Even in his brief scenes, Studi shows everyone how it is done, but it might be co-writer Robert Homer Mollohan who makes the strongest impression as the reckless Cash.

Unfortunately, Timothy V. Murphy’s unapologetically serpentine Williams just does not ring true. Feds are nothing if not politically astute, so the degree to which he goes about antagonizing local law enforcement feels more like a clichéd contrivance.

Although it has some swagger, “Paloma” is not a meathead movie. It is a rather dark, character-driven affair that has a real point to make.

Essentially, Momoa, Mollohan, and co-writer Jonathan Hirschbein suggest that federal jurisdiction over crimes committed by outsiders on reservation land has created an incentive for predators to prey on Native American victims. That is the good old federal government at work.

Recommended on balance, “Road to Paloma” opens this Friday, July 11, in New York at the Quad Cinema.