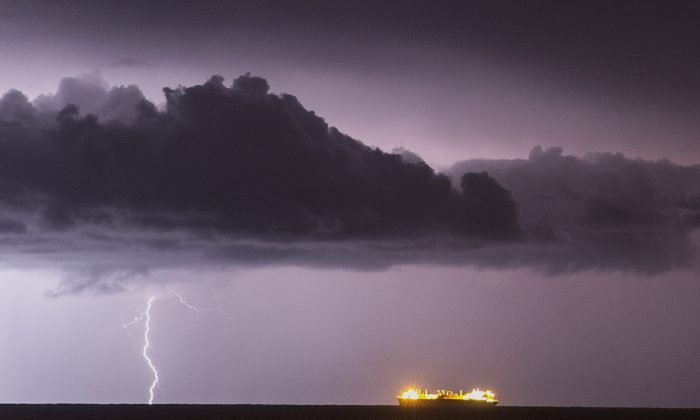 A ship sails in the Mediterranean Sea as lightning strikes, seen from the settlement of Mikhmoret, Israel, on Nov. 24, 2014. (Jack Guez/AFP/Getty Images)
Environment

The temperature and acidity in the Mediterranean Sea are rising, and researchers are worried it will lead to extinction of native species.

Villefranche-sur-Mer oceanographic laboratory in the south of France released a study that said the ocean’s acidity has been rising on average of 7 percent a year between 2007 and 2015 and the water temperature rose 0.7 percent over the same period.

These rates are higher than any ocean in the world, researchers said.

Every week, the researchers take a boat from the southern French town of Villefranche-sur-Mer several hundred yards out. They takes samples of water at different depths and bring them back to the lab for analysis.

National Scientific Research Centre (CNRS) director of research, Jean-Pierre Gattuso said the change in temperatures and acidity has already changed the ecology of the ocean.

“There are species that come from the southern coasts of the Mediterranean, so we end up seeing a Mediterranean that is becoming almost subtropical,” he said.

And he’s worried that native species are going to die out, like the posidonia, a seagrass native to the Mediterranean that provides oxygen to fish.

Other species that could face extinction in the ocean are oysters, small molluscs, coral, and mussels.

In 2014, researchers at the laboratory co-authored a report on how temperature increases affect Mediterranean mussels.

The 10-month experiment raised the water in the mussel’s tank by 5 degrees Fahrenheit, and increased the acidity of the water by 0.3 units. By the end of the experiment, all the mussels had died. By controlling for different factors, researchers concluded they died because of the warmer water.

“While ocean acidification will potentially contribute to lower growth rates, especially in summer when mussels are exposed to suboptimal conditions, ocean warming will likely pose more serious threats to Mediterranean mussels in this region in the coming decades,” the report, published in the journal Frontiers in Marine Science, said.

CNRS research director Gattuso said both acidification and the warming is a result of increased carbon dioxide in the atmosphere.