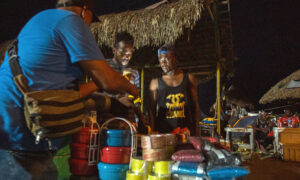 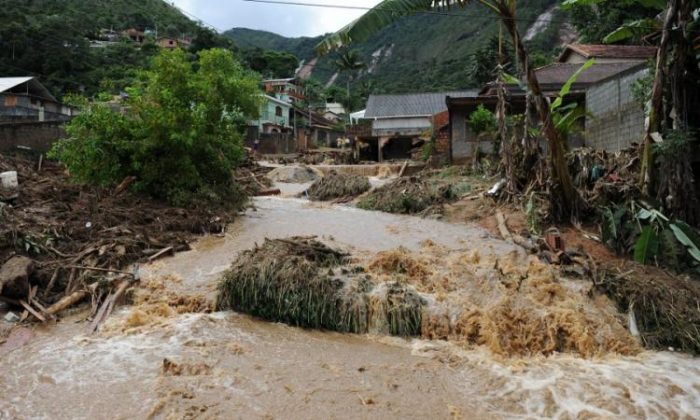 DISASTER'S PATH: A general view of a street after heavy rains caused mudslides in a low-income neighborhood in Teresopolis, some 60 miles from downtown Rio de Janeiro, Brazil, on Jan. 12. (Vanderlei Almeida/AFP/Getty Images)
Americas

Rio Still Reels From Its Worst Disaster in History

RIO DE JANEIRO—Heavy floods trigged powerful mudslides sweeping away entire hillsides and every house in its path last month. Now, as Brazil is coming to terms with its most deadly natural disaster in the country’s history, it becomes clear much needs to be done to prevent further tragedies.

The disastrous floods and mudslides that submerged 24 cities in the State of Rio de Janeiro killed 873 people, the Brazilian Ministry of Health and Civil Defense announced on Wednesday. In total some 30,000 people have been forced to leave their homes. The reconstruction it is estimated to cost $1.2 billion and take up to four years.

In some areas the tourist industry saw 100 percent cancellations in hotel and resort reservations. The country’s tourism secretary, Ronald Azaro, estimates that the sector will lose $48 million.

In the wake of the floods and mudslides, the signs of solidarity have mattered greatly. Some people have climbed into the mountains to help rescue efforts; others have spontaneously started collections to support the victims who will be suffering from the loss of home and livelihood.

The volunteers say they have succeeded in bringing aid to places not reached by firefighters. The armed forces are also continuing search efforts in areas previously still hard to reach due to heavy rain.

Questions are now being raised about how the disaster was allowed to unfold as it did. Brazil’s space research and meteorology institutes said they saw the heavy rains coming, and sent out warning messages days in advance. But the rapid deterioration of the situation and lack of proper equipment to monitor the storm’s developments left many caught by surprise.

Brazilian news website O Dia reports that in the city of Petropolis, also hit by the floods, 19 meteorological stations were closed just a few months earlier. Had those stations been monitoring the situation, they could have provided vital information that would have lead to people evacuating sooner.

A similar tragedy that occurred in early 2007, but on a smaller scale, had triggered Brazil’s Public Ministry to order the removal and resettlement of illegal constructions in risk areas. However, the order was never carried out because at the time of the mudslides last month, the case was still pending in court.

An estimated 5 million people in Brazil in 800 different areas are at risk of landslides and floods, according to Brazilian Minister of Science and Technology Aloizio Mercadante.

According to Jorge Henrique Prodanoff, professor in the Department of Water Resources and Environment of the Federal University of Rio de Janeiro, the problem is a lack of political will to fundamentally change the problems.

“The construction of infrastructure, such as drainage and basic sanitation will not attract votes, because they are underground and do not appear,” Prodanoff said.

According to Prodanoff, reservoirs need to be built to absorb the rainwater, preventing it from accumulating and causing deadly mudslides.

The country’s President Dilma Roussef, did announce on Jan. 17 the creation of a national system aimed at disaster prevention and increasing preparedness for natural disasters. The plan includes the restructuring of Brazilian Civil Defense, which will take four years, and bringing in technological equipment to help mobilize communities more quickly.