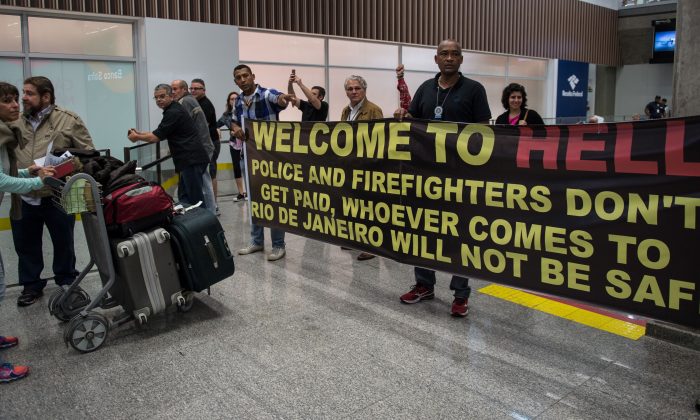 With just a month until the Rio Olympics, the city’s first responders are protesting, saying they will not be able to protect tourists.

Gathering early in the morning on July 5, protesters held signs at the Rio airport saying, “Welcome to Hell. Police and firefighters don’t get paid. Whoever comes to Rio de Janeiro will not be safe.”

The protesters, including police and firefighters, used puppets in uniforms stained with red ink to represent police who had been murdered. Some demonstrators also painted their faces red, according to local media.

The dozens of protesters were demanding unpaid wages, overtime pay, and better work conditions. More than 50 Rio state police have been killed so far this year, reported local media.

But Rio police have also come under fire for what Amnesty International and other human rights organizations call excessive tactics. A report released last week shows over 100 people have been killed by police in Rio so far this year. The majority of the dead were young black men.

Last year, at least 307 people were killed by police in Rio, Amnesty said.

The state must pay on Wednesday, June 6, wages to more than 80,000 police officers, military police, prison guards and firefighters on duty, as well as 73,000 retirees and pensioners.

As the protest was underway at the airport, the second installment of May salaries had begun to be paid, according to O Globo. The state reported it had deposited the money to about 310,000 active workers, pensioners and retirees—20 days late.

The delayed payments are repercussions of the financial crisis.

Brazilian officials have said those attending the Games should not worry about security. Brazil plans to have a force of 85,000 security personnel on the streets, one of the largest policing operations in the history of the Olympics.

“We are absolutely sure of the quality of the operation we are assembling,” said Andrei Rodrigues last week, according to the Associated Press. Rodrigues is responsible for overseeing Brazil’s security at special events.

“We already did it in the [soccer] World Cup two years ago, this is no rhetoric. Rio does successful events every year, this will be no different,” said Rodrigues.

The Rio Olympics has been plagued by issues like the Zika virus, economic problems, and crime worries, as well as a shutting down of the city’s drug testing lab just weeks before the games begin.