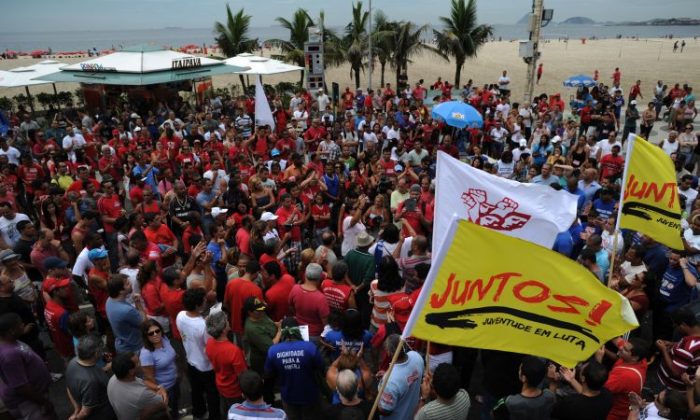 Firemen and police officers demonstrate over pay at Copacabana beach in Rio de Janeiro, on February 12. The strike was called off on Monday to not disrupt Carnival.  (Christophe Simon/AFP/Getty Images)
World

With only days to go before Carnival celebrations, Rio de Janeiro police and firefighters ended a strike for higher wages on Tuesday, according to media reports.

The union told the BBC that its members voted to end the strike and demonstrations.

A few days earlier, police in Bahia State ended their weeklong strike after accepting a pay raise. The work action resulted in a spike in the murder rate.

Fernando Bandeira, an organizer of a police union in Rio, told Reuters that officers went back to work “to help Rio de Janeiro and its tourism” ahead of Carnival and the 2014 soccer World Cup. More than 70,000 members of the police force were on strike and 30,000 were on strike in Bahia. Carnival begins on Friday.

However, as Bandeira told The Associated Press, police intend to go back to demanding a pay raise once Carnival is over.

“What we were given were crumbs, and not even close to what we asked for,” he told the news agency. “After Carnival we’re going to talk again to renew our demands. The movement is alive.”

According to the BBC, police and firefighters in Rio de Janeiro were offered a 39 percent pay increase but were on strike for more. Unions said the increase still does not make up for years of decreases in wages.