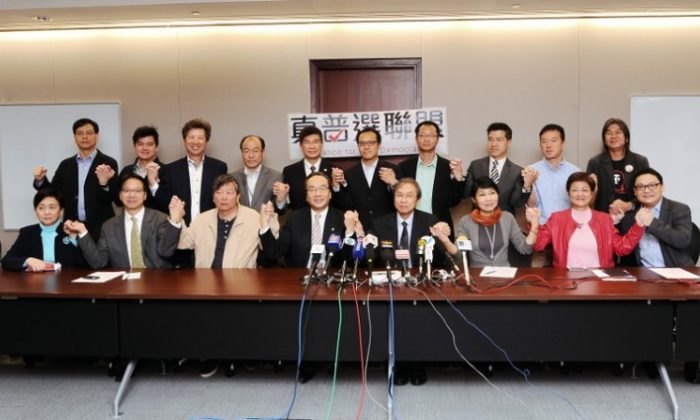 The Alliance for True Democracy has worked to counteract more CCP delays in implementing universal suffrage for Hong Kong in 2017, but Beijing said the CCP will screen the 2017 candidates, dashing their hopes. Here 27 lawmakers from 12 pan-democratic groups gathered on March 21 to form the group, which aims to leverage citizens’ power to achieve universal suffrage in electing the chief executive and the Legislative Council. (Song Xianglong/The Epoch Times)
China

Responding to a new screening process put in place by Beijing for candidates for Hong Kong chief executive, Human Rights Watch (HRW) issued a statement yesterday saying the people of Hong Kong should be allowed to choose their own candidates.

A speech last week by the chairman of Beijing’s Basic Law Committee, Li Fei, revealed that the Chinese Communist Party (CCP) will establish a committee to screen candidates for Hong Kong’s highest post, eliminating candidates that did not meet the screening mechanism’s criterion.

The committee to screen and nominate candidates for the chief executive would be composed of a small, selected group of Hong Kong residents who chose the candidates allowed to run in the upcoming elections, according to Li.

Candidates who “confront the central government” would not meet the screening criterion, Li said in his announcement, echoing the stance of his predecessor on the Basic Law Committee and the director of Hong Kong’s Liaison Office.

“Beijing has now made it crystal clear that genuine democracy will not be on offer to the people of Hong Kong,” said Brad Adams, HRW’s Asia director. “While saying it will hold a public consultation, the Chinese government has already decided to retain control over who governs Hong Kong.”

Pro-democracy groups had proposed that all Hong Kong voters be part of the candidate-choosing process for the 2017 election.

The nomination process must not violate The International Covenant on Civil and Political Rights (ICCPR), HRW said, and screening by the CCP to eliminate opposition candidates would be a clear violation.

The International Covenant, signed by the British when Hong Kong was a colony, still applies to Hong Kong, says HRW. The covenant guarantees both voting and candidate rights by insuring that both rights comply with the principles of universal and equal suffrage.

Human Rights Watch urged the Hong Kong government and the CCP to develop a time-bound and detailed plan, which would insure both universal and equal suffrage practices. All proposals for nominating candidates for the upcoming 2017 chief executive elections should allow for public consultation and should conform to international human rights standards, including the ICCPR standards, HRW said.

“Instead of spending time devising schemes to break promises on electoral reform, the Chinese government should move toward genuine universal suffrage,” said Adams. “The people of Hong Kong have continuously made it clear that they want real democracy. Beijing’s games only undermine its legitimacy in the territory.”