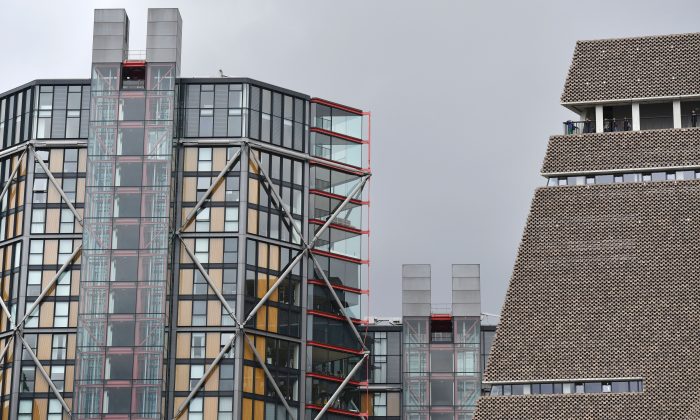 The viewing gallery at Tate Modern (R) has attracted visitors who want to sneak a peak at the glass-walled luxury flats just 20 metres away (L). The museum’s extension opened in June. (BEN STANSALL/AFP/Getty Images)
Europe

The viewing gallery in London’s Tate Modern extension has awakened the voyeuristic instincts of visitors, who crowd the outdoor space to sneak a peek at the glass-walled luxury riverside flats opposite.

The flats are just 20 metres (66 feet) away from the museum’s pyramid-like extension which opened in June, allowing visitors to witness the daily lives of wealthy residents who say they are fed up.

“It’s quite horrible… I feel like I’m on display all the time,” one tenant in the NEO Bankside development whose dining room faces the gallery restaurant was quoted by Thursday’s Guardian daily as saying.

Some have complained that pictures of the interiors of their houses were being shared on social media.

One NEO Bankside employee said the residents of the two developments facing the museum, which gets over five million visitors every year, want part of the viewing gallery closed to prevent people looking in.

Tate director Nicholas Serota has ruled this out, saying that the viewing gallery is one of the highlights of the extension. Instead, he encouraged rich residents to “put up a blind or a net curtain”.

Flats in the development sell for more than £4 million ($5.2 million) each and Serota said owners knew about the extension.

“People purchased them with their eyes wide open,” he said.

The NEO Bankside employee, who requested anonymity, said that the flats do have curtains but residents did not want to “be in the dark all day long”.

Tate Modern has made some concession to the criticism, however, by putting up a sign in the viewing gallery reading: “Please respect our neighbours’ privacy.”

This has come in for some mockery on social media.

“These signs in Tate Modern are really helpful for adding context when taking photos of the posh flats opposite,” mattfromlondon wrote on Twitter.

Yannick Pucci wrote: “Haha. Potentially the most ‘do exactly the opposite thing’ signs in London”.

After visiting the gallery, Valerie, a 55-year-old French woman, said she could not resist the temptation to have a look at the flats.

“It’s always fascinating to see what others are doing,” she confessed, adding that the lavish interiors “look like design exhibition spaces”.

“Personally, I would put up curtains,” she said.

She pointed out that the viewing gallery closes at 6:00 pm: “They get peace and quiet in the evening.”

London’s Burning: Festival Will Culminate With a City Ablaze on the Thames
TOP NEWS