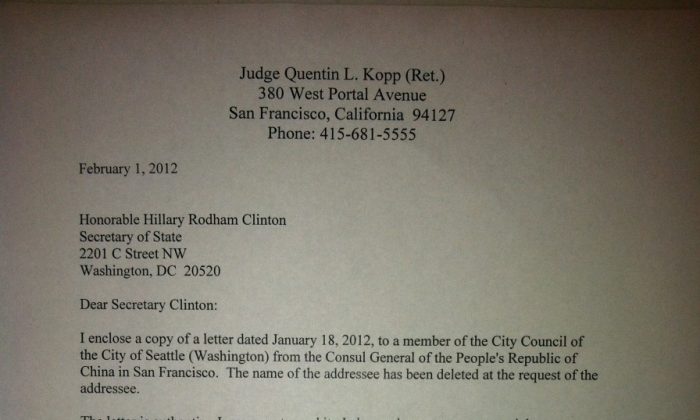 Judge Kopp's letter to Secretary of State Clinton.
US

A former politician and judge from San Francisco wrote to the State Department expressing his concern about Chinese influence in the United States.

Gao Zhansheng had written to a member of the City Council in Seattle in January, asking the council member not to attend the Feb. 7 Shen Yun Performing Arts performance in that city.

“It astonishes me as an American citizen that a foreign government’s representative at the Chinese Consulate in San Francisco can seek to intimidate and prevent support of a cultural institution in our country and a theatrical production of considerable merit,” Kopp wrote in his letter.

Shen Yun is the premier Chinese classical dance company in the world. Its performances include historical vignettes and group performances, which also include artistic depictions of the CCP’s ongoing persecution of the Chinese spiritual discipline Falun Gong. The performance is often presented locally by Falun Dafa associations of various cities.

“The performance tells the truth about what happens in China—that you can’t follow your own spiritual path,” said Zhiping Kolouch, president of the Falun Dafa association in Seattle, in a previous interview with The Epoch Times. “Right at this moment you have millions of people in China who stand to lose everything they have because of their beliefs.”

“I’m really upset that the consulate should think it can influence elected members in a host country, where they’re our guest,” she said.

The letter sent by Gao evoked notions of “friendship” and “bilateral cooperation” between Seattle and its Chinese sister city, Chongqing. These friendly relations might have been jeopardized if the council member attended the Shen Yun performance, the letter indicated.

Kopp attached Gao’s letter in his note to Secretary of State Clinton, and asked to be informed of whether the Department is aware of similar activities by Chinese consular officials in the U.S.

“I also write to recommend that you act to prevent further attempted intimidation of this group by advising the Foreign Minister of the People’s Republic of China it will not be tolerated and is not acceptable behavior in the United States of America,” Kopp wrote.