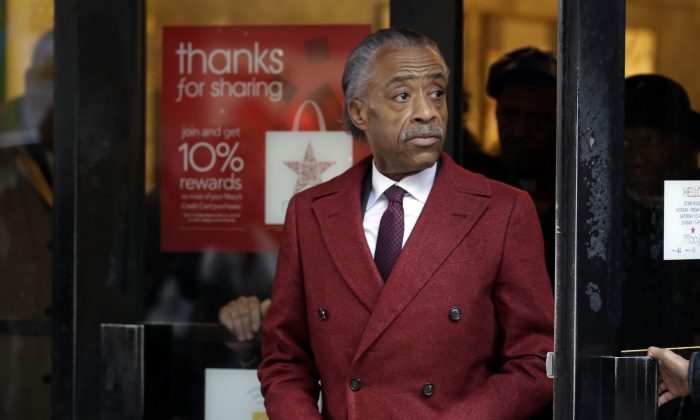 The Rev. Al Sharpton leaves Macy's flagship store, in New York, after a meeting with the CEO of Macy's to talk about racial profiling, Nov. 4, 2013. It follows an incident in which a leading actor on the HBO series "Treme" was detained by police after buying his mother an expensive watch. (Richard Drew/AP)
New York

NEW YORK—Retailers and community groups have agreed on a shoppers’ bill of rights to address allegations of racial profiling.

The agreement, drafted by the Retail Council of New York State trade group, prohibits profiling and unreasonable searches and states that workers who violate their employers’ prohibition on profiling will be disciplined and could be fired.

Retailers have agreed to post the bill of rights in stores and on their websites. The bill of rights will address what customers can expect and what employees can ask when they suspect someone of shoplifting.

The Rev. Al Sharpton, the Retail Council of New York State, NYCLU, and community groups made the announcement Monday at the Fifth Avenue Presbyterian Church.

Sharpton emphasized that the bill of rights is the beginning of a process, not its conclusion. He said community groups would continue to work with retailers until they could “guarantee shop and frisk is something of the past.”

A spokeswoman for Mayor-elect Bill de Blasio said he appreciates the bill of rights and the retailers’ efforts.

“He has said repeatedly that his administration will have zero tolerance for racial profiling of any kind,” said the spokeswoman, Lis Smith.

Ted Petrakis of the Retail Council of New York said the meetings have helped establish a good-faith relationship with community groups toward resolving racial profiling concerns.

According to Sharpton, Barney’s, Macy’s, Saks Fifth Avenue, Bergdorf Goodman, Lord and Taylor, and Gap have all been part of the ongoing meetings.

Macy’s is cooperating with the coalition, said Ed Goldberg, a senior executive.

“We subscribed to the document that’s going to be realized today by the retail council,” Goldberg said. “I think we’re making excellent progress.”

In October, a 19-year-old college student, Trayon Christian, sued the NYPD and Barneys, claiming he was racially targeted after buying a $349 Ferragamo belt in April at the Madison Avenue store.

And Barneys customer Kayla Phillips, 21, filed a complaint with the city’s police watchdog agency, saying she had a similar experience after buying a $2,500 Celine handbag in February.

Barneys CEO Mark Lee had apologized, saying, “No one should go through the unacceptable experiences described by Trayon Christian and Kayla Phillips in recent media reports, and we offer our deepest sympathies to them.”

But the company said in a report that its employees did not initiate any profiling, and did not call police requesting or suggesting that the customers be stopped or detained.

Actor Robert Brown filed a lawsuit against Macy’s, saying he was stopped inside its flagship store in Herald Square in June after he purchased a $1,350 Movado wristwatch. Brown said he thought he was stopped because he is African-American.

Macy’s has said it does not tolerate discrimination. Barneys said two weeks ago that it would start monitoring the police as they monitor shoppers in its flagship Manhattan store.

“Profiling” is defined generally as the practice of judging and addressing people based on their race, color, religion, sex, sexual orientation, gender identity, national origin, age, disability, ancestry, appearance, or any personal or physical characteristics.

Profiling is an unacceptable practice and will not be tolerated.

[Store name] is committed to ensuring that all shoppers, guests, and employees are treated with respect and dignity and are free from unreasonable searches, profiling, and discrimination of any kind in our store.

[Store name] strictly prohibits unreasonable searches and/or the profiling of customers by any employee. The participation by employees in such activities or the failure to report such instances of which they have knowledge is a violation of company policy.  Employees who violate the company’s prohibition on profiling will be subject to disciplinary action, up to and including termination of employment.

[Store name] supports the use of internal programs to test compliance with our strict prohibition against profiling practices.

[Store name] requires its employees to respect the basic civil and legal rights of any person suspected of shoplifting or other crime committed on store property.

[Store name] requires all loss prevention employees to identify themselves as members of [Store name] loss prevention department when initiating any customer contact and to willingly provide his/her name to any customer upon request.  The use of excessive force or using threatening, vulgar language when apprehending or detaining suspects or in the course of performing any duties as a loss prevention representative is prohibited.

A person may be detained only in a reasonable manner and for not more than a reasonable time to permit investigation or questioning, provided an authorized employee has reasonable grounds to believe that the person so detained was guilty of criminal possession of an anti-security item or was committing or attempting to commit shoplifting on the premises (New York State General Business Law, Section 218).

Nothing contained herein is intended to limit any other obligations the Store may have or rights that the shopper may have under any Court decrees or under state and federal Constitutions or the laws of the State in which the Store is located.