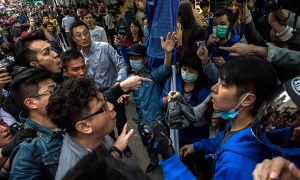 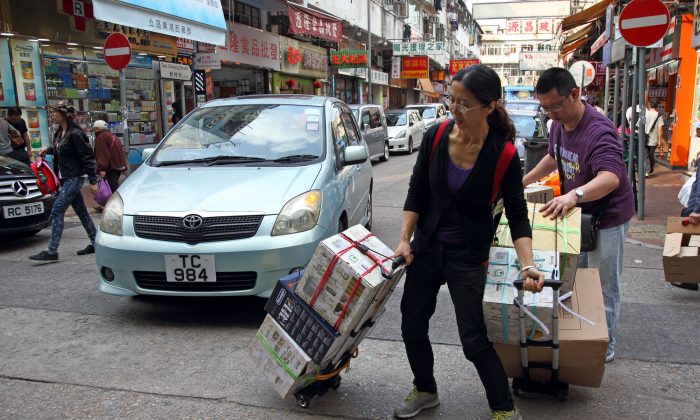 Authorities announced Monday that residents of China’s Shenzhen City can only visit Hong Kong once per week, effective immediately. The multiple-entry scheme for them to visit Hong Kong, implemented five years ago, has been abolished.

The new policy is expected to alleviate disturbances to residents in Hong Kong’s Northern District caused by parallel-goods traders, who visit Hong Kong to buy goods for resale in mainland China. The problems caused by these traders have intensified in the past six months, highlighting the antagonism between Hong Kong and China as well as the confidence crisis under the communist rule.

Eligible Shenzhen residents can only visit Hong Kong once a week, and therefore a maximum of 52 times per year. Any unused quota will then be forfeited.

New People’s Party legislator and National People’s Congress (NPC) representative Michael Tien Puk-sun, who has been continuously lobbying for a revision of the old scheme, described the announcement as “the coming of a late spring.”

He pointed out that residents with multiple-entry permits seldom stayed overnight in Hong Kong. It was therefore expected that the policy-tightening would only have a minor effect on retail business and the tourist industry, but it would be an effective means to slash parallel-goods trading activities.

“I have carried out a detailed survey of the customer profiles in the 40-plus shops operated by our company,” Tien said. “Those on multiple visas and those on single-entry permits both account for about half of the total.”

Responding to concerns from the tourist industry, Tien suggested that the Individual Travel Scheme should be extended to more mainland Chinese cities.

“We have not made any developments since 2007. Many residents from major cities including Qingdao, Xi’an, and Harbin can travel to Taiwan freely but not to Hong Kong,” said Tien, who claimed to have already proposed this to the central government in February before the NPC Congress.

The current multiple-entry scheme was introduced in April 2009. By paying a fee of 100 yuan (US$16), Shenzhen residents could pay unlimited visits to Hong Kong in a year.

Parallel-goods traders have taken advantage of the scheme and have been criticized for affecting the daily livelihood of local residents, triggering anti-parallel-goods-trading protests in the territory.

Political commentator You Qingyuan maintained that the recent decline in visitors might not be a result of the protest, but could be mainly attributed to exchange rate movements. He said that the policy-tightening was an attempt to limit the rapid influx of Shenzhen visitors under the multiple-entry scheme, which has led to an over-stretching of the territory’s capacity, and the policy was by no means targeting mainland Chinese visitors as a whole.

“Hong Kong people always extend their arms to visitors since we are a civilized tourist city,” said You.

Lam added that there are too many mainland visitors in Hong Kong now, and the over-burdening of the territory’s resources has deepened the conflicts between Hong Kong and China. He suggested that the policy should be restricted to eight visits per year.

It has been estimated that the new policy could slash the number of Shenzhen visitors by 4.5 million per year.

The intensification of the disputes over parallel-goods trading in the past six months has led to ever-widening divisiveness within the society. According to some analyses, the disputes might have been due to the accumulation of agony in the aftermath of the Umbrella Movement for democracy in Hong Kong, while the possibility that the Chinese Communist Party (CCP) was actually the mastermind behind these disputes could not be dismissed.

Pro-China media have been exaggerating the anti-parallel-goods-trading conflicts as well as the “Hong Kong Independence Movement,” which has yet to gain recognition and support from the mainstream segment of the society.

Such reports are spreading rapidly in mainland China and adding fuel to the antagonism between Hong Kong and the mainland. Leaders from the pro-CCP group Hong Kong Youth Care Association have been spotted in the anti-parallel-goods trading protests.

Such disputes could well be related to the complicated political situation in China during the intense conflicts between the Xi Jinping and Jiang Zemin factions of the CCP.

An editorial in Ta Kung Pao described the protest activities in Tuen Mun as “city guerilla war” and warned that Hong Kong people must “take extreme caution against the cancer caused by the Hong Kong Independence Movement.”

In late March, Leung singled out Legislative Council (LegCo) member Claudia Mo as a leader in the protest movement. Earlier this month, he blamed the protest for the drop in the number of tourists coming to Hong Kong.

In several anti-parallel-goods-trading protests, leaders from various pro-CCP groups have been seen loitering at the scene.

LegCo Member Fan Kwok Wai said that the Chinese authorities and Leung have deliberately tried to intensify Sino-Hong Kong conflicts. In particular, Leung was trying to shift the focus and use the Hong Kong Independence Movement and foreign influence as excuses for his incompetence in governing the territory.

Political commentator Lai Chak Fun said there are rumors that Hong Kong’s political reform proposal will be tabled at the LegCo as early as this week. He believes that China’s tightening of the visa scheme might be an attempt to gain more support for the proposal from the Hong Kong people.

However, Lai did not see that Leung had any role in such a move. Earlier, Leung said that Shenzhen did not agree to any tightening of the visa scheme, and the Hong Kong government was not informed before its announcement.

Lai did not rule out the possibility that this development was the result of the high-level struggle within the CCP. Following current CCP leader Xi Jinping’s disputation that foreign influence was behind the Occupy Central Movement for democracy in Hong Kong, local communist followers and the Sino-Hong Kong Liaison Office “cooked up” the Hong Kong Independence Movement, followed by the request by the pro-establishment camp to enact the anti-Hong Kong Independence Law, Lai said.

“All these only involved the hardliners. People from the legal sector such as Liao Cheung-sing and Elsie Leung never spoke out,” Lai added.