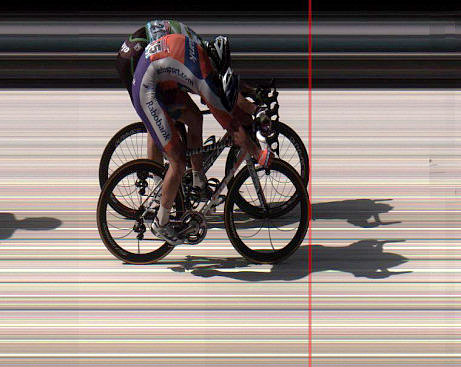 Mark Renshaw (L) beat Matt Goss (3R) to the line to take the ninth win of his career. (TourofTurkey.org)
Cycling

After a stage of non-stop attacks—the last not caught until 200 meters from the line—Renshaw, who spent the last few years leading out Mark Cavendish, showed he is a winning sprinter in his own right.

The finish was so close Renshaw didn’t know he had won.

“Until they told me after the finish, I didn’t know the answer,” he told Eurosport. “I knew it was really close.

“I know Matt Goss really well—we train together in Monaco—and I think after the line we both looked at each other and went, ‘Who got that?’

“I had my fingers crossed. Just the one tenth of a second that I threw my bike before his—I think that made the little difference.

“It’s starting to come together now, Rabobank; it’s taken a little while. I’ve been hunting this victory for as long time; to finally to put a run up on the board, I’m ecstatic.”

Ivailo Gabrovski of Konya Torku held on to the leader’s turquoise jersey. The Bulgarian champion, riding for a Turkish Continental team against the much more powerful ProTour squads, had to try to cover every attack alone—without race radios, he had a hard time knowing which riders might be General Classification threats.

Luckily for the plucky Konya Torku rider, tomorrow’s is a sprint stage; he will not have to burn himself out chasing every rider who goes up the road.

Stage Four, 132 km from Fethiye to Marmaris, was very hilly. With only one categorized climb but very little flat road, this was a great stage for a breakaway and equally well suited for a sprint.

“It wasn’t a flat stage at all,” Renshaw commented. “It was only short, but often that produces the best racing. We saw today, we had three climbs in the start and then quite a tough climb at the finish—it’s quite exciting having the short racing. I think Tour of Turkey has done well with the parcours this year.”

Next: Many Breakaways, All Caught