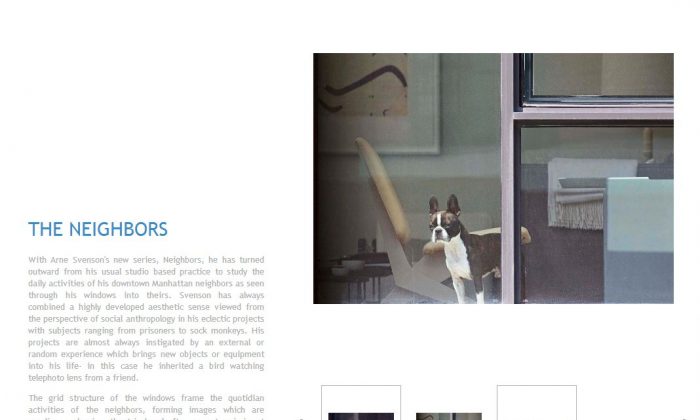 A screenshot of Svenson's website shows one of the photos.
US

Some residents at a Tribeca apartment building in Manhattan were secretly photographed and the photos were shown in a Chelsea art gallery, drawing criticism.

The residents were upset because they had no idea they were photographed, reported the New York Post. The artist responsible for the photography was Arne Svenson.

Some of the photos depict the residents cleaning, taking naps, carrying kids to bed, and doing other mundane tasks. The photos do not show the full faces of the people.

And the shots are being sold for as much as $7,500 each at the Julie Saul Gallery, which opened an exhibit of the photos on Saturday.

“This is about kids. If he’s waiting there for hours with his camera, who knows what kind of footage he has. I can recognize items from my daughter’s bedroom,” one resident, who appears in one of the photos, told the Post.

Svenson wrote of the photographs on his website: “Having no interest in birds, I turned to the residents of a glass-walled apartment building across the street from my NYC studio.”

“The Neighbors don’t know they are being photographed; I carefully shoot from the shadows of my home into theirs. I am not unlike the birder, quietly waiting for hours, watching for the flutter of a hand or the movement of a curtain as an indication that there is life within,” he adds.