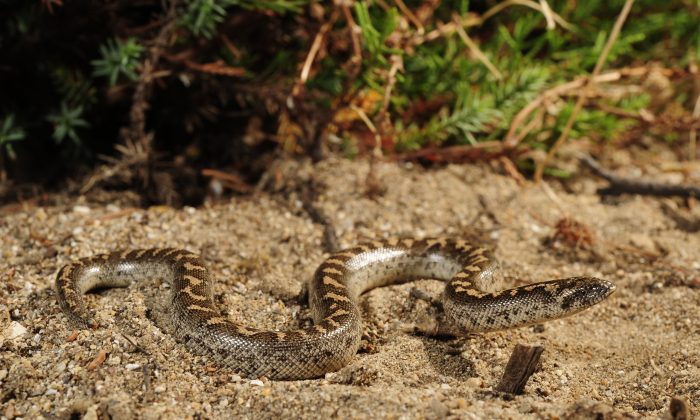 Imagine you are in battle, probably scared out of your wits, and then enemy troops start flinging snakes in your face. The ancient Greeks did just that, says a group of researchers who rediscovered a species of boa in Sicily used in warfare.

“The Greeks used to use snakes as projectiles, hurling them at enemy ships before attacking in order to create confusion and fear,” said one of the researchers, Gianni Insacco, according to the news agency Ansa. “In general, they used vipers that had had their venom removed. Alternatively, they would use similar species, like the sand boa.”

Researchers say they have located several specimens of Eryx jaculus, the javelin sand boa, in the province of Agrigento, Sicily. The shy, non-venomous snake is not native to Sicily but the researchers think the Greeks introduced it long ago.

Ancient Greeks colonized Sicily from around 800 B.C. The area where the researchers found the snakes is near the site of two ancient battles.

They published their findings in a short article in the journal Acta Herpetologica in October 2015.

“Ancient introductions of snakes for religious cults or for war rituals were also proposed by Masseti and Zuffi (2011), with a particular reference to the Greeks who inhabited the area for a long time and fought two important battles on those [southern Sicilian] lands in 405 [A.D.] and in 310 [A.D.],” says the scholars’ paper.

The javelin sand boa is about 12 to 24 inches (30 to 60 centimeters) long. It was first reported in Sicily in the news media in 2006, but the researchers confirmed its presence there in their new study. They found six specimens—three live and three dead, two dead on the road and one drowned in a shaft, and there have been many reports over the years of other sightings.

The Greeks were not the only ones known to use snakes against their enemies. An article about using animals in warfare on AllEmpires.com gives a harrowing account of a 190 B.C. battle that involved Hannibal Barca:

In a naval engagement against the King of Pergamum, Eumenes II, while a mercenary for a certain Empire in the East, Hannibal filled thousands of clay jars with venomous snakes and took them aboard his outnumbered and doomed fleet.

As the Pergumese fleet approached, the command was given to hurl all the jars onto enemy ships. As the jars smashed, the snakes crawled out and wreaked absolute havoc among not only the sailors up top, but the oarsmen too. Snake filled jars were being flung left right and centre and the end result was in Hannibal’s favour, with him winning a comprehensive victory due to the chaos he created in the enemy’s ranks.

Republished with permission. Read the original at Ancient-Origins.com.